The political row over municipal elections escalating, a councillor from Delhi’s ruling Aam Aadmi Party made a dramatic point today to the BJP-led civic body. Haseeb-ul-Hasan, AAP councilor from East Delhi, jumped into an overflowing sewage drain in Shastri Park to clean it up.

Cellphone videos showed him standing chest-deep in the drain in a gleaming while kurta, using a rake to remove the floating debris. His assistants are seen standing gingerly on hard ground, handing various implements.

After the clean-up, Mr Hasan’s supporters gave him a bath in milk, much in the style of actor Anil Kapoor in Bollywood blockbuster “Nayak”. Videos of the milk bath have been widely circulated as well.

A nominated councillor of AAP, Mr Hasan later said the drain was overflowing and repeated complaints to officials, the BJP councillor and the local MLA have not helped. So he decided to take matters in his own hands today. The local MLA is Anil Kumar Bajpai, a member of the BJP. 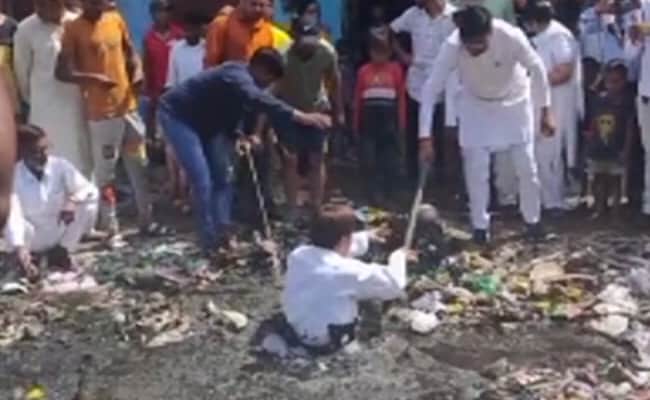 AAP leader jumps into drain to clean it

The ruling AAP and the BJP have been engaged in a clash for weeks over the Centre’s plan to merge the three civic bodies of the national capital. Today, a bill to effect that got the go-ahead from the Union cabinet.

AAP has questioned the timing of the bill, which is likely to derail the civic polls. Chief Minister Arvind Kejriwal has appealed to Prime Minister Narendra Modi not to postpone the civic body polls.

“Prime Minister, governments will come and go. You won’t be there, I won’t be either. But do not weaken the institutions of the country. Don’t postpone MCD elections,” Mr Kejriwal said in a video message earlier this month, which was tweeted by AAP from its official handle.