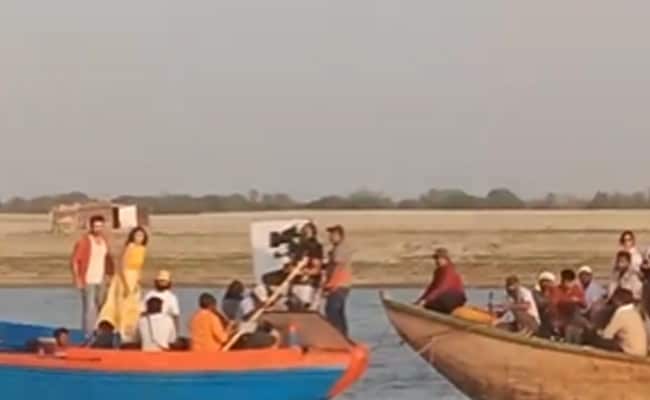 Alia Bhatt and Ranbir Kapoor are currently in Varanasi shooting for their upcoming film Brahmastra. The fans are eagerly waiting to see them together on the silver screen for the first time. However, they are equally eager to watch the actress in her upcoming film RRR, co-starring Ram Charan and Jr NTR. Recently, a video was doing rounds on all the social media platforms wherein Alia is promoting RRR. In the video, Alia Bhatt and Ranbir Kapoor are waving at their fans standing on a ferry when one of the fans yells RRR. On hearing this, Alia Bhatt immediately screamed RRR along with the fans.

With RRR, Alia Bhatt will mark her debut in the South Indian industry. For the past few weeks, Alia has been promoting her upcoming film at different locations, along with co-stars Ram Charan, Jr NTR and director SS Rajamouli.

The film is based on two Indian revolutionaries– Alluri Sitarama Raju and Komaram Bheem, who fought against the  British Raj and Nizam of Hyderabad. In the film, Alia Bhatt has an extended cameo role of Sita.

Produced by DVV Danayya of DVV Entertainments, RRR is slated to release on March 25, 2022.

Coming back to Alia and Ranbir, they both have an interesting line-up of films ahead. Ranbir has Shamshera, Animal and Luv Ranjan’s untitled. While, Alia will be next seen in Karan Johar’s Rocky Aur Rani Ki Prem Kahani, Darlings, and Farhan Akhtar’s Jee Le Zaraa.