Are you someone who enjoys spicy food? If yes, then you surely know the importance of adding chilli to a recipe. Chilli plays an indispensable role in almost every desi recipe. Popularly referred to as mirchi, chillies were first believed to be brought to Asia by Portuguese navigators during the 16th Century. According to food historians, Vasco-Da-Gama brought chillies to India and made it popular among the natives. But what fascinates us the most is the fact that you get a variety of chillies across India. If you explore you will find more than ten types of chillies grown in the country – each of which comes with its unique taste and texture. While some are enjoyed across India, some varieties remain region specific. Take Kashmiri laal mirch for instance. Grown in Kashmir, it is commonly used in almost every Indian kitchen. Whereas, if you see Guntur chilli, its usage majorly limits to Andhra cuisine. Then there is Bhut Jolokia or ghost pepper, which was certified as the hottest chilli in the world in 2007.

Here we bring you some of the most popular varieties of Indian chillies that have been granted the Geographical Indication (GI) tag. For the unversed, GI tag is a sign used on certain products which corresponds to a specific geographical location or origin.

Also Read: Green Chilli Or Red Chilli? Which One Is The Healthier Option 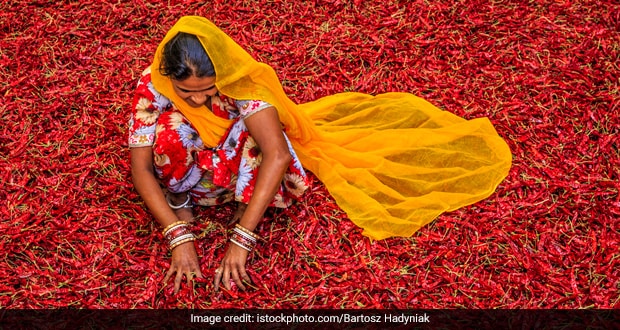 5 GI Tagged Chillies From Across India:

Bhut Jolokia, also popular as Naga mirch, is referred to as the hottest chilli in the world. It is majorly cultivated in north-eastern states of Arunachal Pradesh, Assam, Nagaland and Manipur. Bhut jolokia is popularly used to prepare chutney and in combination with pork or dried fish. The chilli received its GI tag in the year 2008.

Another variety of chilli grown in the north-eastern state of Manipur is Hathei chilli. It is grown in the Sirarakhong village of Ukhrul district and is known for its unique flavour and colour. It received the GI tag in the year 2021.

If you have been thinking that there’s something unique about the momo chutneys found in Darjeeling, then you are absolutely right. It used a specific kind of chilli that adds the flavour to the chutney. This chilli is called dale khorsani. Grown in Sikkim and its demographically similar counterpart hills of Kalimpong and Darjeeling in West Bengal, dalle got its GI tag in the year 2020.

This chilli from South Indian state of Kerala received a GI tag in 2021. What makes Edayur chilli unique is the low pungency in its flavour. This uniqueness can be attributed to the environmental and soil condition of the particular area where this chilli is grown.

Also referred to as Khola chilli, this variety received its GI tag the year 2020. Grown in Goa’s Khola region, this chilli is known for its rich red colour and medium heat.

Which of the above varieties of chillies have you already tried? Do let us know in the comments section below.

About Somdatta SahaExplorer- this is what Somdatta likes to call herself. Be it in terms of food, people or places, all she craves for is to know the unknown. A simple aglio olio pasta or daal-chawal and a good movie can make her day.