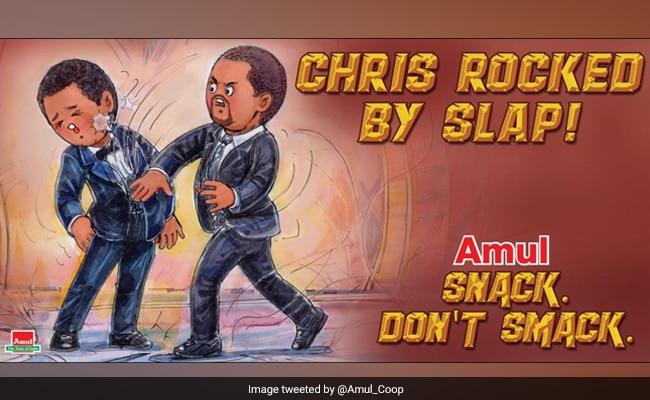 Wiill Smith strode up to Chris Rock and slapped him during the Oscar ceremony.

The Will Smith-Chris Rock showdown at the Oscars has spawned a whole lot of memes and a frenzy of responses. Dairy brand Amul too has joined the list with its spoof of the slapgate.

Actor Will Smith walked up to the stage and delivered a hard smack across comic Chris Rock’s face as he made a joke about the actor’s wife, in a moment at Sunday’s gala that immediately went viral and left viewers stunned.

Rock, presenting the best documentary prize with a short comedy routine, had cracked a joke comparing Jada Pinkett Smith’s tightly cropped hair to Demi Moore’s appearance in the film “G.I. Jane” and suggesting she appear in a sequel.

Smith strode up to Rock and slapped him.

“Keep my wife’s name out of your f*****g mouth,” yelled Smith, forcing the producers to bleep out several seconds of audio from the televised broadcast in the United States.

Jada Pinkett Smith, who is also an actress, suffers from alopecia, and publicly revealed her diagnosis in 2018.

Minutes later, Will Smith won the Best Actor Oscar for his performance in King Richard.