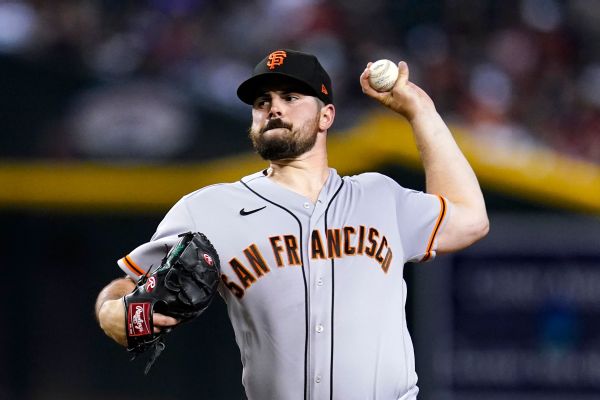 San Francisco Giants pitcher Carlos Rodon, frustrated after the fifth inning in a 7-3 loss to the Arizona Diamondbacks, kicked a bat in the dugout that hit shortstop Thairo Estrada in the knee on Tuesday.

“Unacceptable action,” Rodon said after the game. “I hit my teammate, the nicest teammate on the team. Just a selfish action, and it just cannot happen. Stupid.”

Estrada stayed in the game and was hit by Luke Weaver‘s pitch leading off the sixth. That one got him in his arm guard, and he later scored on Brandon Belt‘s double.

Rodon (8-6) gave up three hits in six innings. Two were home runs, though, accounting for five runs. He struck out 10, walked two and hit a batter.

Rodon said frustration was building up from his previous start at the Los Angeles Dodgers and increased in the desert.

“My last two starts haven’t been great, and today I wanted to come out and get a win for the boys,” he said.

Manager Gabe Kapler immediately went to see if Estrada was okay after being struck.

“Carlos feels terrible, he knows it’s unacceptable,” Kapler said. “These are his teammates and if he’s not able to maintain control, somebody can get hurt. … We’re going to work on ways for him to be in control in those situations.”