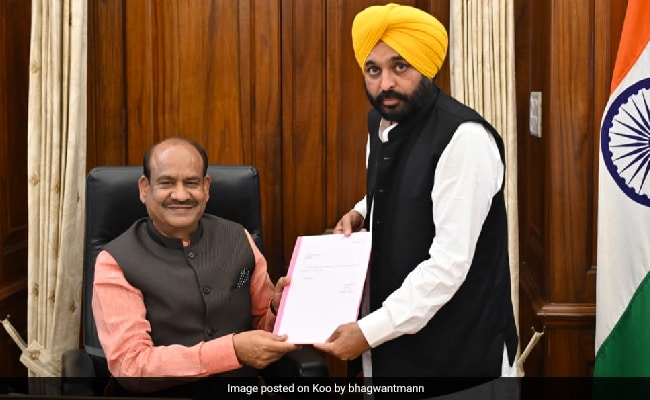 Bhagwant Mann was a two-time MP from Punjab’s Sangrur.

Punjab Chief Minister-designate Bhagwant Mann on Monday resigned from the Lok Sabha, a day before his swearing-in ceremony.

An MP from the Sangrur constituency in Punjab since 2014, the Aam Aadmi Party (AAP) leader handed his resignation to Speaker Om Birla.

“The people of Sangrur have showered me with so much love for many years, many thanks for this. Now I have got an opportunity to serve the whole of Punjab. I promise to the people of Sangrur that in a few months, their voice will be heard again in the Lok Sabha,” he had said in Koo.

On his last day in the House as an MP, Mr Mann told news agency ANI, “I will miss this House. Punjab has given me a huge responsibility. I promise to the people of Sangrur that a bold voice for them will echo soon in this House.”

Mr Mann, 48, who was the party’s Chief Ministerial candidate, will take the oath on Wednesday at the freedom fighter Bhagat Singh’s village, Khatkar Kalan.

Mr Mann, who was contesting from Dhuri assembly constituency in Sangrur district, won by a margin of over 58,000 votes over Congress’s Dalvir Singh Goldy.