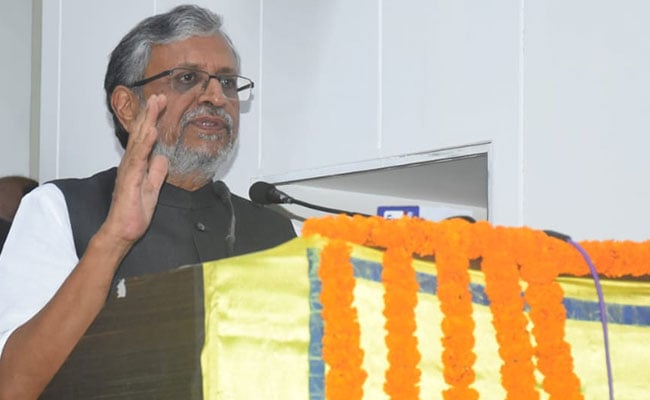 “Priyanka Gandhi Vadra said she was the face of Congress in UP and tried to mislead women with her ‘I am a woman, I can fight’ slogan but the people gave her just 2 seats. Despite this, no Congress leader asked for her resignation from the post of General Secretary,” he said in Hindi on Twitter.

“A party steeped in dynasty and corruption is only pretending to introspect for many years,” he added.

Mr Modi, BJP’s Rajya Sabha MP from Bihar and the state’s former Deputy Chief Minister, has bitterly criticised the Congress party in a series of tweets since yesterday.

In a jibe at Congress leader Sonia Gandhi and son Rahul Gandhi, who he said was the “de-facto supremo” of the party since there has been no full-time formal chief of the party in many years, he said that Congress has even lost the will to save the party and protect its internal democracy.

Mr Modi said that Congress leaders don’t have the courage to free the party of the Gandhi family even after a “shameful” routing in five states. “The party will be wiped out even from Rajasthan and Chattisgarh in the next elections,” he said.

Congress interim president Sonia Gandhi along with her family members Rahul Gandhi, and Priyanka Gandhi Vadra had proposed to resign during the Congress Working Committee meeting on Sunday but the CWC unanimously rejected this, a senior party leader told news agency ANI yesterday.

The CWC called the recent assembly election results of five states a “cause of serious concern” for the party.

The Gandhi family has come under severe criticism after the party’s massive rout in the recent state election, with demands of a leadership change in the party growing louder every day. Leaders of the “G-23” – the group of 23 “dissenters” who had written to Sonia Gandhi two years ago – held a meeting on Friday at the house of senior leader Ghulam Nabi Azad.

Many internally predicted yet another futile exercise in the name of “introspection” with the Congress Working Committee – in which Gandhi “loyalists” easily outnumber “dissenters” – widely expected to steer clear of hard decisions. There are only three members from the “G-23” in the CWC – Anand Sharma, Ghulam Nabi Azad and Mukul Wasnik.