Long before the war in Ukraine, India’s Prime Minister Narendra Modi decided that international card networks could be used as instruments of statecraft – and that he should channel the rising economic power of his country’s 1.4 billion people to resist the dominance of Visa Inc., Mastercard Inc. and American Express Co.

“Everyone cannot go to the border for the security of the nation,” Modi said in a 2018 speech. “If you develop a habit of using RuPay card … that will also become a medium to serve the nation.”
Like Russia’s Mir and China UnionPay Co., RuPay is a homegrown card network, promoted by the National Payments Corporation of India since 2012. New Delhi has pushed it so aggressively over the last few years that a worried Visa Inc. has complained to the U.S. government about the lack of an even playing field in India, according to Reuters. Mastercard has grumbled as well. Meanwhile, Discover Financial Services’ Diners Club as well as Mastercard and American Express have gotten into regulatory trouble with the Reserve Bank of India over data localization rules.

The decision by global card firms to boycott Russia over its invasion of Ukraine may amplify nationalist sentiments. But will RuPay ever become a serious alternative? It may take more than patriotism to take on the entrenched payment institutions.

Modi’s unhappiness with Western networks – at least, based on what he said publicly in 2018 – was about sharing processing fees with foreigners. However, in the wake of card platforms’ suspension of Russian clients’ access to merchants overseas, the link between plastic and politics has acquired a more serious dimension: circumventing potential denial of service.

With active state patronage, RuPay has issued more than 600 million cards, giving it a 60%-plus share in India in late 2020, up from just 15% in 2017, according to the RBI. However, most of the instruments are debit cards, linked to no-frills savings accounts that the Modi government opened in large numbers for the poorer sections of society as part of its financial inclusion campaign. The 1% to 2% of the population with meaningful purchasing power isn’t quite ready to junk their Visa or Amex cards.

Winning over the credit-card customers who spent 878 billion rupees ($11 billion) with merchants in January – 50% more than debit-card users – won’t be easy. Since the spending classes want a card that’s also accepted overseas and by e-commerce websites, NPCI has set up an entity dedicated to internationalizing RuPay.

A 10-year-old tie-up with Discover Financial does give RuPay cards some acceptance in foreign markets. In a presentation to investors in 2020, Roger Hochschild, the chief executive officer of Discover, called it a “tremendously successful” collaboration: “We provide technology for them so that they issue using our account number ranges. We provide a chip spec for them, we provide secure remote commerce connectivity for them and they take care of everything in market,” he said.

However, if the ultimate goal is to lower the nation’s vulnerability, relying so heavily on the technology of  yet another American card firm isn’t a great solution. Nor is RuPay’s other partnership – with Japan’s JCB International Co. – likely to give it the heft it needs.

But India has something better than plastic that it can internationalize. Unified Payments Interface, a public utility operated by NPCI, is a mobile phone-based technology under Indian control. Apps running over it are handling as much in merchant payments as debit and credit cards put together. Including person-to-person transfers, digital transactions are five times as big as cards payments and growing rapidly. NPCI’s international wing signed a deal with Dubai’s Mashreqbank PSC last year to let the 2 million Indians who visit the Gulf emirate annually use UPI. 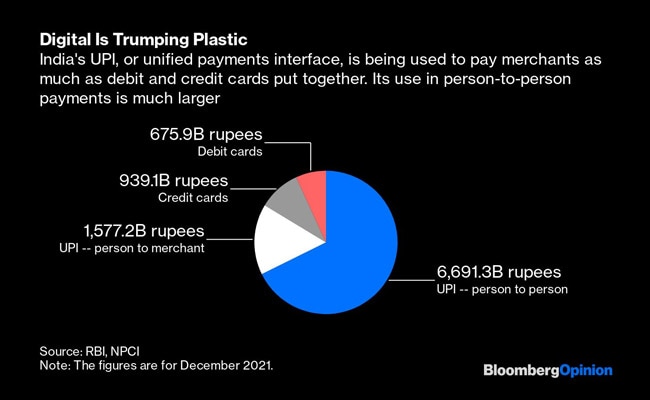 Rather than stitching deals from country to country, India could opt for another solution: Nexus, which is the Bank for International Settlements’ blueprint for 24/7, real-time cross-border payments. The prototype, developed with the cooperation of NPCI and the Monetary Authority of Singapore, could link up the digital payment systems that exist in 60-plus nations – with room for more to join. Nexus won’t be another app. Rather, it could become the world wide web of payments, a set of rules any country can adopt.

When Singapore’s PayNow established the world’s first cross-country link with Thailand’s PromptPay last year, the arrangement enabled real-time fund transfers to mobile numbers in the other country. It doesn’t yet allow users to pay via QR code, which would make it merchant-friendly. But it shouldn’t be too hard to add this functionality in a multi-country setup.

In the long run, moving beyond plastic – and taking a more internationalist, open-network approach like Nexus – might be a more viable strategy than nationalism to wriggle out of the chokehold of the giant payment platforms. Many of the senior professionals in India’s policy circles are old enough to have carried credit cards that were valid only in India and Nepal. They may be wary of a Western-dominated globalized future, but they will not want to be pulled back to an insular past.

Andy Mukherjee is a Bloomberg Opinion columnist covering industrial companies and financial services. He previously was a columnist for Reuters Breakingviews. He has also worked for the Straits Times, ET NOW and Bloomberg News.