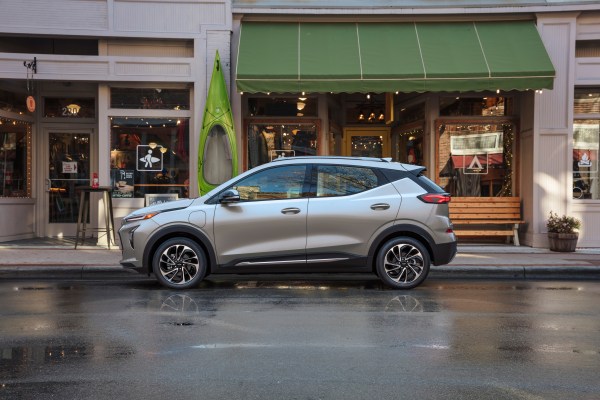 Chevy offered rebates to Bolt EV owners who bought their cars just before a 2023 model price drop, but that discount comes with a large catch. Jalopnik and Autoblog note the rebate application requires that drivers “forever waive and release” their right to sue GM or LG over the Bolt’s reported battery defect. You’d have to be content with the savings even if the car did serious damage, in other words. GM confirmed the agreement language with Engadget.

GM first recalled the Bolt in November 2020 after reports of battery fires between 2017 and 2019. The automaker tried addressing the issue with a software update in April 2021, but two subsequent fires and a second recall led the NHTSA to warn against parking indoors. That prompted a July 2021 recall where GM replaced the battery packs. The brand eventually recalled all manufactured Bolts, pledged an additional $1 billion for battery replacements and offered an eight-year, 100,000-mile warranty on substitute batteries.

The company has since used financial incentives to regain trust. It slashed the price of the Bolt EV and Bolt EUV between $5,900 and $6,300, and offered comparable rebates to people who bought 2020, 2021 and 2022 models this year. The exact rebate amounts depend on the model year and trim level.

As Jalopnik explained, this isn’t the first time GM has used legal agreements to protect its reputation. Cadillac Lyriq buyers were offered a $5,500 discount if they agreed not to talk about problems with the electric SUV, and purchasers of high-end cars like the Hummer EV void their warranties if they flip their vehicles within a year. However, this latest move could easily be the most concerning — the rebate amounts to a legal settlement rather than a kind offer.