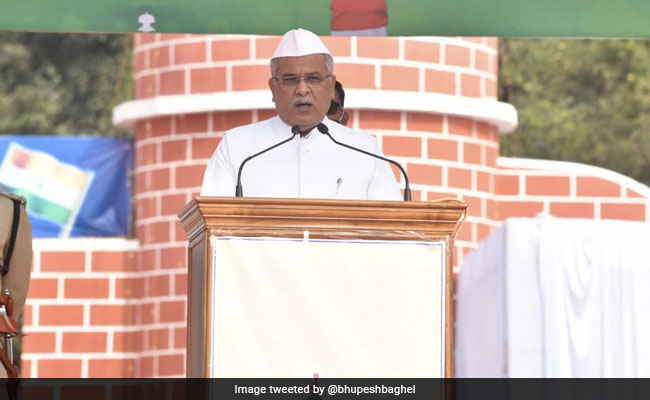 Bhupesh Baghel has invited all MLAs to watch “The Kashmir Files” at a mall in Raipur. (File)

Amid the demand by the opposition BJP to make “The Kashmir Files” tax-free in Chhattisgarh, Chief Minister Bhupesh Baghel on Wednesday said that the Centre should give a tax break to the movie as it gets a portion of the tax from states.

He invited all the MLAs to watch the film at a mall in Raipur.

Speaking after Question Hour, Leader of Opposition Dharamlal Kaushik of BJP said “The Kashmir Files” should be exempted from tax in Chhattisgarh.

Responding to Mr Kaushik, the chief minister said, “Let’s go to watch this film. The Government of India also gets a share in the tax, therefore, the Centre should exempt the movie from the tax in the entire country.”

“After the introduction of Goods and Services Tax (GST), half of its share goes to the Centre. The Centre should declare the film as tax-free in the country,” the Chief Minister said, adding that all legislators would watch the film after adjournment of the House on Wednesday.

Later, in a statement, the state public relations department said that the Chief Minister has invited all the MLAs and other dignitaries to watch “The Kashmir Files”.

All tickets for the 8 PM show of the movie have been booked, the release said.

On Monday, senior BJP MLA Brijmohan Agrawal had alleged that the Congress government didn’t want people to watch “The Kashmir Files” in large numbers and pressuring cinema halls to not sell all tickets to restrict footfalls, a charge refuted by the ruling party as baseless.

The strength of the Chhattisgarh Assembly is 90. One seat is lying vacant at present.

Written and directed by Vivek Agnihotri and produced by Zee Studios, the film depicts the exodus of Kashmiri Hindus from Kashmir following systematic killings of people from the community by Pakistan-backed terrorists.

It stars Anupam Kher, Darshan Kumar, Mithun Chakraborty and Pallavi Joshi among others.

Some states, including Madhya Pradesh and Gujarat, have exempted the film from entertainment tax.