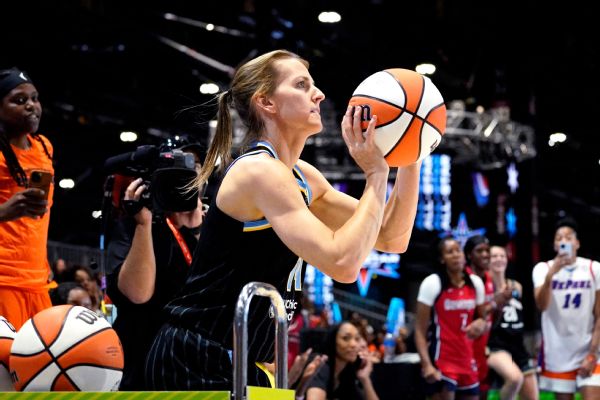 Going last in the final round, Quigley easily turned away Washington Mystics guard Ariel Atkins and Atlanta Dream guard Rhyne Howard. After Atkins put up 21 points and Howard had 14, Quigley rolled to 30 points.

It was one sweet victory for Quigley, who is from nearby Joliet, played college ball at DePaul and helped the Chicago Sky win the WNBA title last season. Sky teammate Candace Parker cheered her on in an Quigley DePaul jersey, and Quigley’s wife, Courtney Vandersloot, another Sky guard, also clapped excitedly courtside.

Quigley said afterward she is 100 percent retired from this event.

Ionescu said of Quigley, “I feel like that contest should be named after her.”

The format for the skills challenge paired a WNBA player with a player from the Elite Youth Basketball League participating in the 2022 Nike Nationals for a full-court obstacle course.