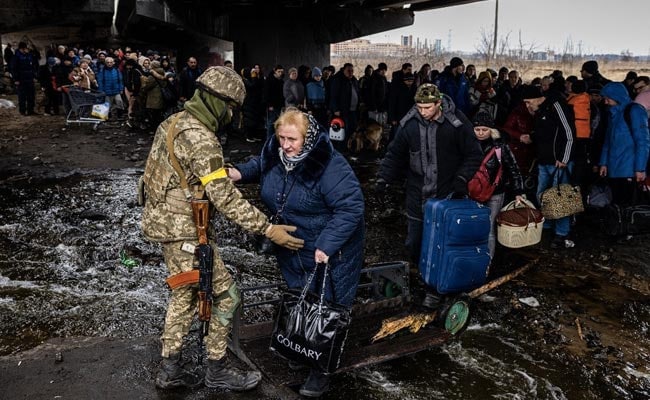 China wants to avoid being impacted by US sanctions over Russia’s war, Foreign Minister Wang Yi said, in one of Beijing’s most explicit statements yet on American penalties that are contributing to a historic market selloff.

“China is not a party to the crisis, nor does it want the sanctions to affect China,” Wang said in a phone call Monday with Spanish counterpart Jose Manuel Albares to discuss the war in Ukraine. “China has the right to safeguard its legitimate rights and interests.”

Concerns are growing among investors that Chinese companies will face US sanctions after American officials said Russia requested military and financial assistance from Beijing. The US warned European allies that Russia asked China for armed drones in late February as it was beginning its invasion of Ukraine, according to people familiar with the matter.

China on Monday dismissed the initial reports as “disinformation,” while Russia denied that it asked Beijing for help, saying it has enough resources to win the war. Neither side has yet responded to the report on armed drones, which China has sold to countries such as Saudi Arabia, Pakistan and the United Arab Emirates.

While US officials have repeatedly warned China against helping Russia evade sanctions, Commerce Secretary Gina Raimondo said last week there was no evidence that any Chinese companies were planning to help Moscow get around the American restrictions.

China has long opposed any unilateral sanctions imposed outside of the United Nations, a position Wang reiterated Monday. To Beijing, which has recently faced US sanctions over human rights issues in places like Xinjiang and Hong Kong, compliance with American penalties is seen as a violation of its sovereignty. In line with that, China has vowed to continue normal trade relations with Russia.

“China always opposes the use of sanctions to solve problems, and even more opposes unilateral sanctions that have no basis in international law, which will undermine international rules and bring harm to the people’s livelihood of all countries,” Wang said.

Even so, China has also resisted taking retaliatory measures that would hurt its own economy even when the US has directly targeted Beijing. During the height of the trade war, China threatened but never implemented an “unreliable entities” list, and even state-run banks have complied with US sanctions on Hong Kong. It also delayed imposing an anti-sanctions law on the financial hub after businesses expressed concern.

China is likely to encourage its big banks to abide by American sanctions and “tread carefully in helping Moscow navigate export controls on key technologies” as long as the US can credibly threaten secondary sanctions, analysts with the US research firm Rhodium Group said in a March 3 report.

“Beijing would clearly prefer to pursue a third way somewhere between the binary choice of supporting Russia or refusing to do so,” they wrote. “The problem for Beijing is that maintaining economic and financial engagement with Russia will be hard to conceal under the current sanctions architecture.”

Although China and Russia are aligned against the US alliance structure and control of the global financial system, cracks in the relationship have emerged since Vladimir Putin’s invasion of Ukraine. Beijing officials have expressed concern about civilian casualties, vouched for Ukraine’s sovereignty and stepped-up diplomacy with European nations while calling for peace talks.

From a political standpoint, President Xi Jinping also has little to gain from a protracted war that continues to roil financial and commodity markets. His government has made stability a priority ahead of a twice-a-decade party congress later this year at which he’s expected to secure a precedent-breaking third term in office.

China also needs good relations with the US and its partners to meet its economic goals, particularly as growth slows to the slowest pace in more than three decades. The US and European Union combined accounted for more than a quarter of China’s total trade in 2020, compared with 2.5% for Russia.

“It remains unclear if China is willing to support Russia that strongly, given that the material benefits of doing so are so limited,” said Charles Dunst, an associate at the Asia Group, a business advisory group. “Beijing would clearly prefer to stay largely neutral while backing Russia somewhat rhetorically, and to then maneuver China into a peace-maker position in some multilateral arrangement if the situation calms down.”