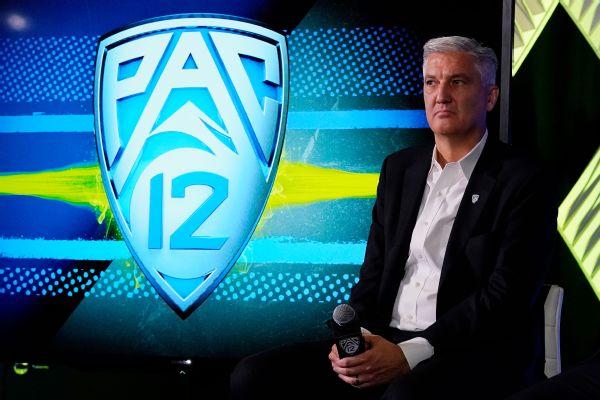 LOS ANGELES — After weeks of speculation about the future of the Pac-12 in the wake of decisions from USC and UCLA to leave for the Big Ten, conference commissioner George Kliavkoff hit back at the assertion the league is on unstable ground.

“We are bullish about the Pac-12’s future and our opportunities for long-term growth, stability and success,” Kliavkoff said at Pac-12 media day Friday. “Our conference boasts 10 of the most iconic and innovative brands in all of sports, all-around excellence in academics and athletics, and a half-dozen of the most valuable markets in this country.”

Several of the remaining Pac-12 schools have been mentioned as possible expansion targets for the Big Ten and Big 12, and comments from both conference commissioners have only fueled the idea. Asked about potentially adding Pac-12 schools earlier this month, the Big 12’s Brett Yormark said the conference is “open for business.”

That didn’t sit well with Kliavkoff, who pointed to the unspecified projected value of the Pac-12 media rights compared to the Big 12 and dismissed the idea that the Big 12 is a more desirable location.

“With respect to the Big 12 being ‘open for business,'” Kliavkoff said, “I appreciate that. We haven’t decided if we’re going shopping there yet or not.”

Kliavkoff’s jab came during a question-and-answer session in which he spoke of his desire for more collegiality among his peers. But he also wasn’t about to let what was being said elsewhere go unanswered.

UCLA and USC announced June 30 that they would leave for the Big Ten in 2024 after roughly a century as integral members of what eventually became known as the Pac-12.

Kliavkoff said the conference was “very disappointed” by USC and UCLA’s impending departures.

“That said, USC and UCLA have been proud members of the Pac-12 for almost a century, despite their decision. We cherish our relationship with their student-athletes, coaches, staff, faculty, alumni and fans,” he said. “For that reason, I personally instructed everyone at our conference to make sure that USC and UCLA student-athletes are given every opportunity to compete and succeed for as long as they remain in the Pac-12.”

Asked about the possibility the schools could reverse course and remain in the Pac-12, Kliavkoff did not rule that out for UCLA, which has faced public criticism from California Gov. Gavin Newsom for its handling of the defection.

“I’d say UCLA is in really difficult position. There are a lot of constituents related to UCLA who are very, very, very unhappy with the decision,” Kliavkoff said. “Student-athletes, the families of student-athletes, the faculty, the staff, politicians, the fans, the alumni, there’s a lot of really, really upset people with that decision and there’s a hearing coming up [with the UC board of regents] about that decision.

“I can’t give you a percentage chance. I think it’s unlikely, but if they came back, we would welcome them back.”