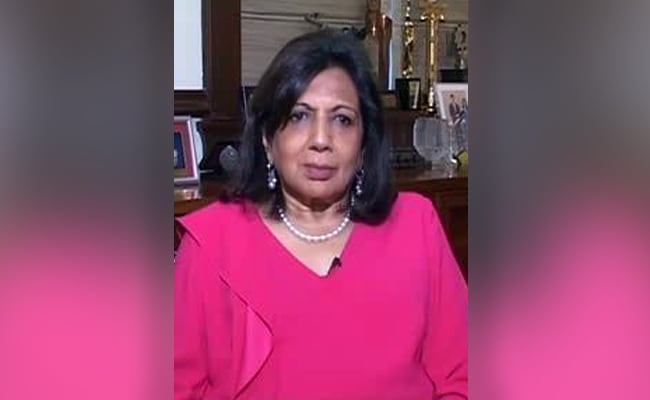 In the middle of a row in Karnataka over a call by right-wing groups to ban Muslim traders from temple festivals, Biocon chief Kiran Mazumdar-Shaw has urged Chief Minister Basavaraj Bommai to “resolve the growing religious divide” in the state, warning that if the tech sector becomes communal it will “destroy” India’s global leadership.

Kiran Shaw is the first big corporate leader to publicly voice concern over what she calls “communal exclusion”, days after the Karnataka government cited an old rule barring non-Hindus from doing business on temple premises.

“Karnataka has always forged inclusive economic development and we must not allow such communal exclusion- If ITBT (IT and Biotech) became communal it would destroy our global leadership. BS Bommai, please resolve this growing religious divide,” Ms Shaw tweeted, sharing a news report.

Karnataka has always forged inclusive economic development and we must not allow such communal exclusion- If ITBT became communal it would destroy our global leadership. @BSBommai please resolve this growing religious divide https://t.co/0PINcbUtwG

A user, responding to the appeal, wrote tagging both Ms Shaw and the Chief Minister: “He will increase this communal divide and Karnataka will fail in front of our eyes.”

To which, Ms Shaw responded: “Our CM is a very progressive leader. I am sure he will resolve this issue soon.”

Karnataka has been struggling with communally divisive rows for months.

The latest is over groups like the Vishwa Hindu Parishad (VHP) and Bajrang Dal demanding a ban on Muslim traders at temple complexes. The campaign has led to some temple blacklisting Muslim traders even though there is no ban.

The state government, which has largely avoided comment on the demand, told the assembly that restrictions on non-Hindu vendors operating on temple premises were based on a rule in 2002 under the Karnataka Hindu Religious Institutions and Charitable Endowments Act, 1997.

The demand to ban Muslim traders near temples is seen to be retaliation over the hijab row, in which Muslim students across the state have been fighting for their right to wear the headscarf in class.

The Karnataka High Court recently backed a state government order banning the hijab in classrooms, asserting that the hijab is “not an essential religious practice in Islam”.