Priyanka Chopra needs no introduction. Apart from Bollywood, the actress has managed to carve a niche for herself globally and made India proud with every achievement. However, her fans know that she is a foodie as well. That’s probably the reason why she stepped into the restaurant game, last year, and established her Indian restaurant “SONA” in New York. It completed one year since it was established, and, on the occasion, Priyanka Chopra shared a video on Instagram, showing glimpses of the restaurant and the food offered there. The fine dining place with a cool vibe has a lot to offer when it comes to Indian dishes.

Some foods featured in the video include salads, followed by exotic dishes and drinks. The clip also goes on to show Indian delicacies like naan, curries, dosa, fritters, chaat among others. In the end, we also got to see a popular street food in India that resembled Dahi puri. 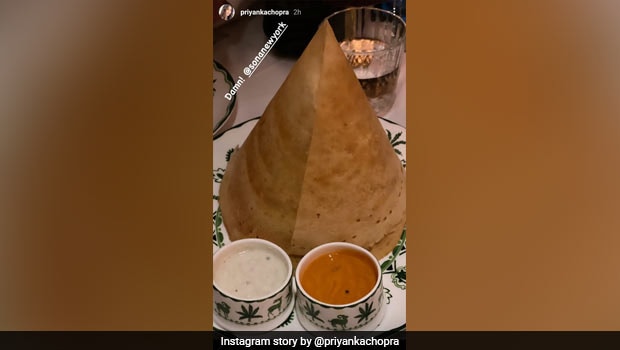 Priyanka Chopra has enjoyed many delicious meals in her own restaurant in New York.

The video carries glimpses of the actress whenever she visited the restaurant. Priyanka Chopra added a long caption to express her feelings around the same. She wrote, “What started for me as another way to introduce modern India to the West, turned into an incredibly fun, cool, and awesome spot in the heart of NYC where you can let your hair down and explore culinary delights and cocktails that are so synonymous with us. As Sona turns a year old today, I couldn’t be more proud.”

She further tagged her partners in the venture — Maneesh Goyal, Hari Nayak, and David Rabin — and stated, “My partners and the dedicated incredible team at have turned their talent and passion into consistently delivering excellence and making your experience as timeless as India herself.”

She concluded by saying, “My heart (and stomach) is full. Here’s to many, many more.” Priyanka Chopra also added a hashtag “One year of SONA New York.” Take a look at the full video here:

Even outside her restaurant, Priyanka Chopra likes to stay close to her culture and traditions. She doesn’t miss a chance to celebrate festivals even when she doesn’t stay in India. Recently, on Holi, she reshared a video on Instagram originally posted by her husband Nick Jonas and gave us a sneak peek into their festivities together, which included yummy bowls of popcorns. Read more about it here.

In December, we saw Priyanka Chopra dining at her restaurant. Guess what she had? It was dosa, which Priyanka enjoyed along with sambar and chutneys. Take a look at it here.

We love Priyanka Chopra’s foodie side and are curious to see what’s next on her plate.