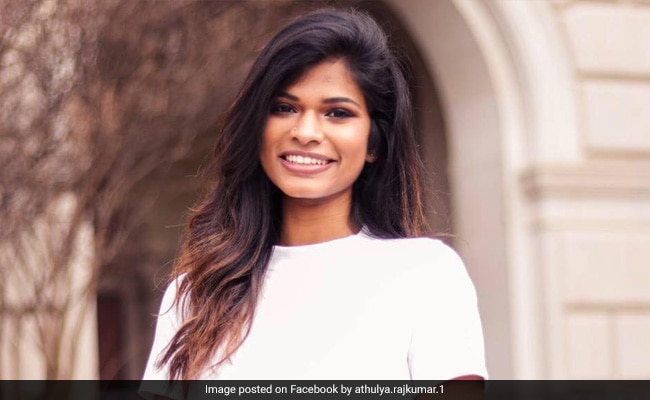 Athulya Rajakumar, 23, is a graduate from University of Texas and lived in US since she was 4.

An Indian-American documented dreamer has told lawmakers that she would be forced to leave the US, where she has spent her entire life since the age of four, in eight months in the absence of any meaningful legislative reforms in immigration system that addressed the major issue of aged out kids.

“Without a change in eight months, I will be forced to leave, not only my home of 20 years but also my mom who is my only family left,” Athulya Rajakumar, a 23-year-old recent graduate of the University of Texas at Austin from the Moody College of Communication, told members of the Senate Judiciary Subcommittee on Immigration, Citizenship and Border Safety on Tuesday.

Testifying before the subcommittee during a hearing on “Removing Barriers to Legal Migration,” the Indian-American told the Senators that over 5,000 documented dreamers face this every year.

An aspiring journalist, Ms Rajakumar, from Washington State, shared the story of her family’s struggle through years of immigration limbo, which contributed to her brother’s tragic death.

“I’m outraged by this broken system that you, your brother, and thousands of documented dreamers have had to face. We organised this hearing today because we cannot allow the inaction of Congress to continue to cause this suffering,” Senator Alex Padilla said in his remarks.

Alex Padilla is chair of the Senate Judiciary Subcommittee on Immigration, Citizenship, and Border Safety, Barriers to legal migration routinely separate families across international borders for years, he said.

“Visa caps that keep employers from expanding their businesses and hold back the US economy, an arbitrary cutoff for legal status that forced children, visa holders, to leave the only country they’ve ever known when they age out of their parents’ visas. The gap between our country’s needs and the realities of our broken immigration system should come as no surprise,” Mr Padilla said.

According to the Senator, currently, there’s a backlog of 1.4 million people who are eligible for employment-based visas.

“But only 140,000 of these individuals can obtain visas every year. Because the spouses and children who accompany them count against the total, far fewer than 70,000 visas actually go to eligible workers. Hundreds of thousands of others are left in limbo, restricted by a temporary visa, or turned away from their dreams and they’re kept from realising their potential,” he said.

Employment-based visas, also known as green cards, allow migrants to gain lawful permanent residence in the US in order to engage in skilled work.

“Indian nationals have been hit especially hard because our system’s per-country caps do not allow them to receive more than seven per cent of the available employment-based visas in any given year,” he said.

“To make matters worse due to processing inefficiencies attributable in part to USCIS’ paper-based system and to the closures of many of our consulates, we fail to issue as many as 92,000 employment-based visas in the height of the pandemic,” he said.

Ms Rajakumar told lawmakers that she got a full-time offer from a major news corporation in Houston, a top 10 market, but the same company who saw her potential withdrew their offer the second they heard about her visa status. “But worst of all, being considered an alien, an outsider in the only place you know to call home is a different kind of pain,” she said.

Dip Patel, president of Improve The Dream, in a statement, said that Ms Rajakumar’s moving testimony shows the urgent need to update the broken system, including the need to permanently end the problem of aging for children who are raised and educated in the United States.

“For thousands of young people growing up with uncertainty, there is constant anxiety regarding one’s future in what we consider our home. Delay in taking action will not only lead to tearing more families apart but also continue the immense emotional turmoil faced by thousands of families who contribute to our country and call America home. We urge Congress to consider this and act fast to pass common-sense immigration reform,” he said.

During the hearing, Mr Padilla questioned Ms Rajakumar about her experience as a documented dreamer and how a pathway to citizenship and the enactment of America’s Children Act would impact her life.

Ms Rajakumar pointed to the fact that it would mean that she wouldn’t have to be separated from her family and the country she’s called her home for the last twenty years.

In November 2020, a policy document issued by the Biden campaign said that Biden will remove the uncertainty for Dreamers by reinstating the DACA (Deferred Action for Childhood Arrivals) programme and exploring all legal options to protect their families from inhumane separation. And, he will end workplace raids and protect other sensitive locations from immigration enforcement actions.

Launched by the Obama administration, the DACA is an immigration policy that allows some individuals with unlawful presence in the US after being brought to the country as children to receive a renewable two-year period of deferred action from deportation and become eligible for a work permit in the US. DACA recipients are often referred to as Dreamers. To be eligible for the programme, recipients cannot have felonies or serious misdemeanours on their records.

According to FWD.US, undocumented immigrants are one of the largest groups among the immigrant essential workforce, making up 5.2 million essential workers, of which nearly one million are Dreamers part of the 2019 American Dream and Promise Act who entered the US as children.

The American Dream and Promise Act also provides relief for “legal dreamers,” the foreign-born children of many non-immigrant workers, including those on H-1B, who unfortunately lose their legal status when they turn 21.

FWD.us is a bipartisan political organisation that believes America’s families, communities, and economy thrive when more individuals are able to achieve their full potential. For too long, the US’ harmful immigration and criminal justice systems have locked too many people out from the American dream.