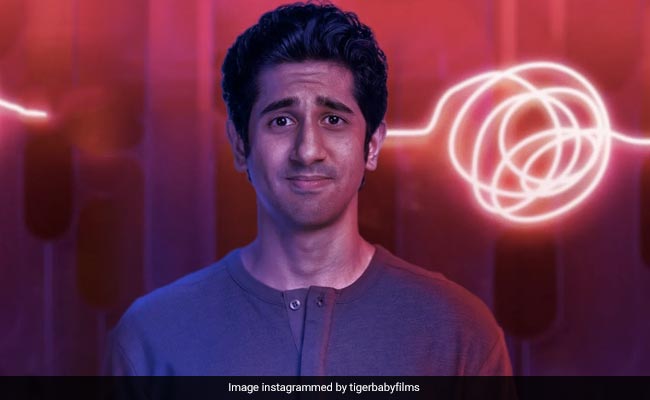 A 24-year-old Mumbai lad, as wiggly as a tadpole, is desperate to get laid. What’s the big deal? The big deal is that while the boy dutifully does the bidding of his raging hormones his wayward heart and mind lead him astray when push comes to shove.

Like most lustful boys his age, Ray (Vihaan Samat), the lead character whose state of mind the title of this new Netflix series describes, gets ahead of himself in his enthusiasm as a matter of routine and gets all tangled up. Eternally Confused and Eager for Love, written and directed by Rahul Nair, is a fluffy, freaky study of the misadventures of a young man in the pursuit of a steady date.

The eight-episode series hinges on the scatty son of a senior marketing executive (Rahul Bose) with a company that manufactures diapers. Learn to catch your own shit before it triggers a stink, his old man advises the boy after he lands in trouble on a blind date and is in need of a pep talk.

It is neither his dad nor his mom (Suchitra Pillai) in whom Ray reposes his trust. They have at best a peripheral role in his life. All his faith is reserved blindly and entirely for the figurine of a wizard that dangles from a keychain – a personification of the boy’s candid, chatty conscience. The imaginary confidant speaks incessantly and repeatedly reminds the boy that he is an embarrassment.

Ray’s ceaseless, rat-a-rat, snarky banter with his ‘inner voice’, for better or for worse, takes up the largest chunk of the narrative. The unrelenting verbal joust is quirky all right but is at times too breathless to make full impact.

Girls float in and out of Ray’s orbit as his attention and intention fluctuate. With his awkward ways, Ray can never keep a goof-up at bay.

Wiz the wise wizard accuses him of indulging is self-sabotage and self-loathing.

Numerous actresses – Namrata Sheth, Devika Vatsa, Tanya Katyal, Niharika Lyra Dutt and Ayana Gaziz as the daughter of the owner of the Japanese investment firm where Ray works – flit in and out of the show as the feckless hero, egged on by his guide, learns the hard way that finding a girlfriend isn’t a walk in the park.

The ‘voice’ knows best, but no matter what it counsels, the young man invariably manages to dig a hole for himself every time he ventures out in search of a girlfriend. Sometimes his parents set him up with a family friend’s daughter, at others a dating site directs him towards a match, and at still others Wiz comes to his aid but to no real avail.

At least one of the many encounters that backfire borders on the juvenile. Ray wishes that he falls ill so that he does not have to attend a party at the home of a girl his parents want him to meet. What happens instead is that the girl’s dad has a heart attack and the bash is called off. Ray blames himself for the unexpected turn of events. Wiz, too, feels an apology from the boy’s end is in order.

The breathless Wiz either hand-holds the protagonist, gives him a nudge or pushes him into the deep end, depending upon what the situation demands. He spit-balls an array of ideas for Ray to mull over and put into practice, but trouble never stops chasing the guy.

A trusted schoolmate Riya (Dalai) and an office colleague Varun (Ankur Rathee), a couple of years Ray’s senior, are also at hand to offer Ray free advice. Both Dalai and Ankur Rathee are effective in their roles as friends whose patience is often severely tested by Ray’s flirtations with disaster.

The toy that gives Ray relationship advice is voiced by Jim Sarbh. Despite not being physically present, Sarbh is the star of the show, a powerful aural and conceptual presence who dominates the series. There are times when you almost expect the voice to acquire a body and jump out from the screen.

The producers of Eternally Confused and Eager for Love – Excel Entertainment’s Ritesh Sidhwani and Farhan Akhtar and Tiger Baby’s Zoya Akhtar and Reema Kagti – are also credited as creative directors.

There is no way of knowing offhand if the involvement so many creative forces is responsible for the show playing out like a series of interconnected skits set in restaurants, at house parties, in Ray’s workplace, around the dining table and in the living room, and even in a hospital cafeteria. The melange of encounters teaches the clueless protagonist a thing or two about the opposite sex and the world at large.

Wiz never tires of bearing bad news for Ray. The blundering boy turns around and asks: Why are you so negative? “I am not being negative, I am being realistic,”, the toy confidant retorts. Reality stings Ray repeatedly but he carries on regardless.

While the series might occasionally appear to be a slice-of-life coming-of-age tale, it frequently launches into itself into flights of fancy, a few of which make landings smooth enough to pass muster. The ones that don’t do no permanent damage.

Eternally Confused and Eager for Love is, to an extent, a tale of mishaps and misfires. After one date goes horribly wrong for Ray, the unstoppable Wiz pipes up: “This is your version of a horror story.” Indeed, Ray lurches from one situation to another in the fond hope of a life-altering miracle. That is his lot.

Miracles elude the show. It stays confined within a severely limited graph. Eternally Confused and Eager for Love is obviously targeted at at a Gen-Z audience, which will probably find a lot to relate to.

Vihaan Samat lends Ray a likeable, believable quality despite all the terrible tumbles that he – and the show – endures along the way. It may be flimsy but it is fun for the most part because Jim Sarbh does not even have to be on the screen to radiate infectious energy. His disembodied voice does the job.