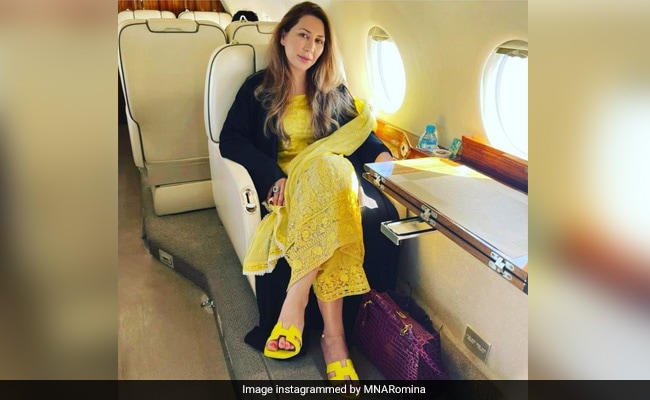 Shortly after a friend of Imran Khan’s wife Bushra Bibi left Pakistan, an image surfaced on social media, which showed her travelling in a flight with a luxury handbag. The friend, Farah Khan, left for Dubai on Sunday after being accused of corruption amid the political turmoil in the country.

The photo, circulating widely on Twitter, shows Khan in a flight with the bag kept near her feet. It is not clear when the photo was taken.

The leaders of opposition parties in Pakistan have claimed that the bag is worth $90,000. “Farah Khan, Bushra’s Frontwoman who ran away. The bag with her is for $90,000. Yes that’s ninety thousand dollars,” tweeted Pakistan Muslim League-Nawaz (PML-N) leader Romina Khurshid Alam.

Farah Khan, Bushra’s Frontwoman who ran away . The bag with her is for $90,000. Yes that’s ninety thousand dollars. pic.twitter.com/ESrZOKD3h6

The photo has invited comments from other Twitter users as well. “Traveling in private jet to Dubai only costs more than 50,000 US dollars. Hermes sandals,” a user said. Khan’s husband had left Pakistan before her.

Opposition parties in Pakistan allege that Farah Khan received a huge sum of money for getting officers transferred and posted according to their choices, calling the scam the “mother of all scandals” amounting to 6 billion Pakistani rupees ($32 million).

Maryam Nawaz, the PML-N vice president and deposed premier Nawaz Sharif’s daughter, claimed that Khan has done this corruption at the behest of Imran and his wife.

According to Maryam, Prime Minister Imran Khan fears that once he is out of power, his “thefts” will be exposed.

There are reports that more close aides of Khan have planned to leave the country after he loses the top office.

On Sunday, Khan dissolved Parliament after the deputy speaker dismissed a no-trust motion against him.

The opposition parties moved the Supreme Court challenging the deputy speaker’s act as “illegal and unconstitutional”.