Congress leader said Sonia Gandhi and her family members were ready to sacrifice their posts.

Congress president Sonia Gandhi, in her speech to senior leaders yesterday at a meeting to discuss the party’s latest election defeats, offered to resign along with her children Rahul Gandhi and Priyanka Gandhi Vadra.

Priyanka Gandhi is General Secretary in charge of Uttar Pradesh, where the Congress failed to make any impact in the state elections. Rahul Gandhi, a Congress MP, has not held any post since he quit as party chief after the 2019 national election defeat, but he continues to call the shots.

Mrs Gandhi presented the resignation offer as the “ultimate sacrifice in the interest of the party”, according to party leaders. 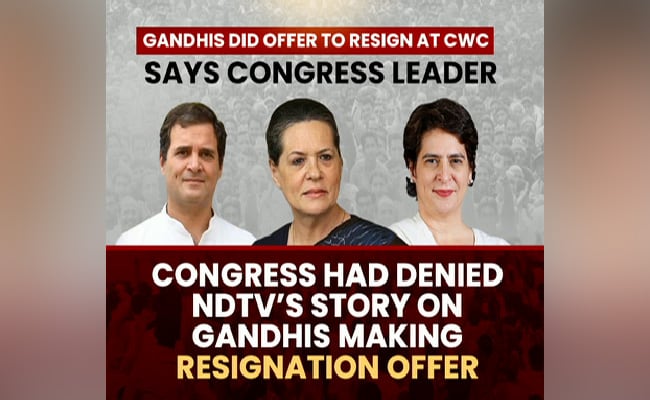 Senior Congress leader Adhir Ranjan Choudhary, who attended the Congress Working Committee meeting, confirmed that this comment was made, as did other sources in the Congress who spoke to NDTV after the meeting of its top decision-making body.

“Congress interim president Sonia Gandhi said that she along with her family members Rahul Gandhi and Priyanka Gandhi Vadra are ready to sacrifice their posts for the party, but we all rejected this,” Mr Choudhary told news agency ANI.

On Saturday, the day before the Congress met, NDTV had exclusively reported that the Gandhis would offer to give up leadership roles. This triggered a strong denial from the party.

“The news story of alleged resignations being carried on NDTV based on unnamed sources is completely unfair, mischievous and incorrect. It is unfair for a TV channel to carry such unsubstantiated propaganda stories emanating from imaginary sources at the instance of ruling BJP,” Congress spokesperson Randeep Singh Surjewala had tweeted. 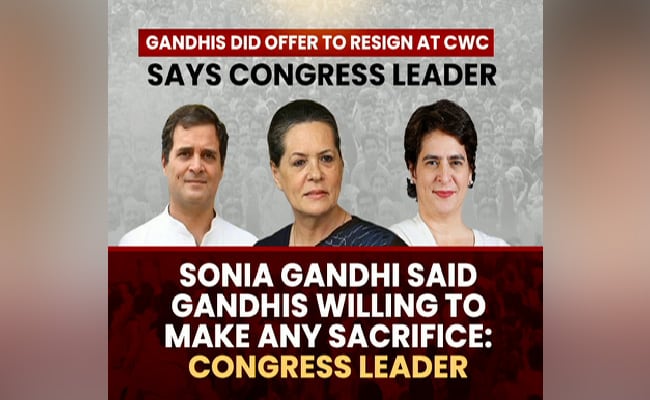 However, the NDTV exclusive report has been proven correct with much of the media confirming that the First Family of the party did in fact say their resignations would be provided if the party felt this was in its best interests.

ANI, citing unnamed sources, said the Gandhis offered to resign but the offer was unanimously rejected. The Hindu has also reported this.

Asked about this yesterday, Mr Surjewala’s answer was deliberately ambiguous though he did not deny it. “Lots of deliberations took place and they are not open to the media,” he said. It was ultimately decided, he said, that until the organisational elections, “there would be no murmur against the leadership”.

Another senior leader, Mallikarjun Kharge, said that “all requested Sonia Gandhi that she alone is not responsible”.

“Every state leader, every MP, Rajya Sabha or whosoever, we all are responsible for the defeat in five states. Not the Gandhi family or Sonia Gandhi. She’s our leader and we all repose our faith in her,” Mr Kharge told reporters.