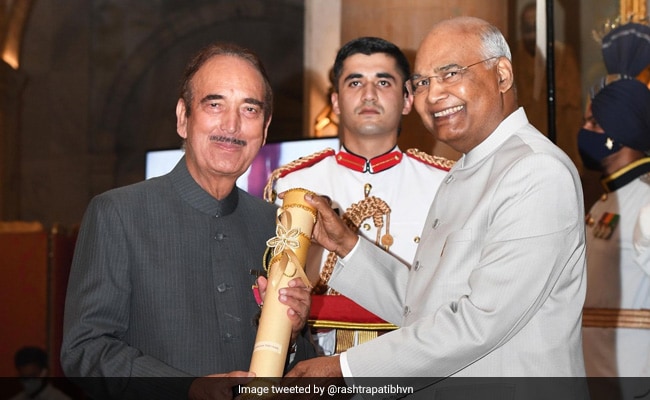 Congress’s Ghulam Nabi Azad, who received the Padma Bhushan award from President Ram Nath Kovind at the Rashtrapati Bhavan today, said, “It feels good when the country or the government recognises someone’s work”.

“I like that someone recognised my work. Even during my ups and downs in different phases of my life, I always strived to work for the people, be it in the social or political sphere or as a (former) Chief Minister of Jammu and Kashmir,” news agency ANI quoted him as saying.

“Keeping this in view, I am happy with the award given by the government and the people of the country,” he added.

The senior leader was one of the two opposition leaders who were listed for the award on the eve of Republic Day amid a churn in the Congress over leadership issues. For his acceptance of the award, he was shaded by a section of leaders in the Congress.

Today, Mr Azad slammed the critics, saying, “Some people always try to see why such awards are given and who are they being given to. They do not recognise the process and the contribution of the person for attaining this award. This award is given by the nation to me.”

The leadership issue in the Congress, for which Mr Azad and the rest of the leaders who wrote to party chief Sonia Gandhi two years ago, is yet to be resolved. The matter has flared up again after the party’s crushing defeat in the assembly elections in five states where the Congress registered one of its worst performances.

Mr Azad received the Padma Bhushan award — the third highest honour — in the field of Public Affairs. One of the highest civilian Awards of the country, Padma awards are given in various disciplines and fields of activities.