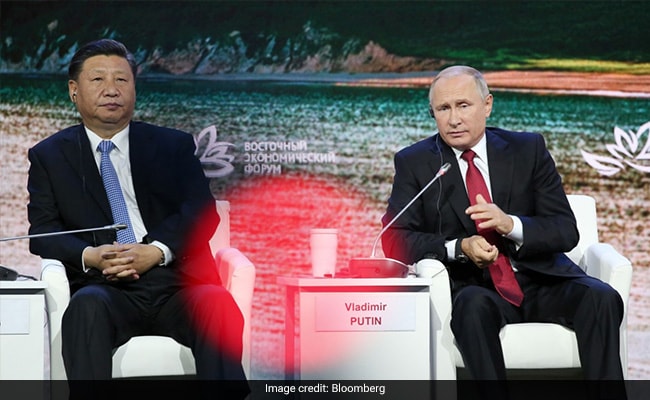 China has already paid some costs for not publicly condemning Russia’s attack on a sovereign nation.

China’s support for Russia in the war in Ukraine is showing its limits as the domestic costs for President Xi Jinping start to outweigh the benefits of confronting the U.S.

Whether a trade war or a real one like in Ukraine, China has shown that it will try to prevent its geopolitical struggles with the U.S. from hurting the domestic economy. A rapidly worsening Covid situation and the need to maintain stability in a pivotal year for Xi make it less likely the Chinese leader would allow Vladimir Putin’s invasion of Ukraine to blow back at home.

Signs of domestic pressure were evident Tuesday, as U.S. warnings against Chinese financial and military support for Russia deepened investor concerns that the world’s two largest economies might decouple. An index of Hong Kong-listed Chinese shares sank 6.6% to the lowest level since 2008, while the Shanghai Composite Index fell the most in two years. A so-called fear gauge — similar to the VIX in the U.S. — has now surged 78% in the past two days.

Against that backdrop, Foreign Minister Wang Yi told his Spanish counterpart Jose Manuel Albares that Beijing wanted to avoid further damage from the sanctions roiling the global markets. “China is not a party directly involved in the crisis, and it doesn’t want to be affected by sanctions even more,” Wang said Monday, according to a Foreign Ministry readout of their call.

The comment is consistent with China’s appeals to deescalate the crisis, even as Beijing attempts to blame the U.S. for instigating the war and its diplomats push Russian conspiracy theories about bio labs in Ukraine. Beijing’s actions appear calibrated to minimize the chances that it gets pulled into a global confrontation or dragged further down economically as it seeks a way past the pandemic.

“China will try to maintain its strategic partnership with the Russian Federation while also trying to offset reputational and economic costs,” said Joseph Torigian, an assistant professor at American University who has a forthcoming book on the power struggles in the Soviet Union and China after Josef Stalin and Mao Zedong. “China has also not sacrificed its own economic interests to help Russia overcome Western sanctions.”

The war in Ukraine has multiplied Xi’s challenges in a year in which Chinese policy makers have pledged to put political stability first. The Communist Party chief needs to reaffirm his reputation as China’s strongest leader since Mao ahead of a twice-a-decade reshuffle in the second half of this year, at which he’s expected to extend his tenure to a precedent-breaking 15 years.

That gives Xi a strong incentive to comply with U.S.-led sanctions, even after years of acrimony with Washington and declaring a “no limits” partnership last month with Moscow. China adopted a similar strategy throughout a trade war with former U.S. President Donald Trump, amping up the rhetoric while avoiding any retaliation that could’ve hurt Chinese companies and industries.

A six-hour meeting between senior U.S. and Chinese officials on Monday prompted speculation about a looming call between Xi and President Joe Biden. The White House said the talks in Rome between U.S. National Security Adviser Jake Sullivan and top Chinese diplomat Yang Jiechi were “substantial” while Beijing said they were “constructive.”

“The big issue now is what decisions and actions China takes,” Singaporean Foreign Minister Vivian Balakrishnan said in an interview to be broadcast at the upcoming Bloomberg Live Asean Business Summit, adding that Beijing has “enormous influence” on Russia. “If you get a deepening of the bifurcation of the global economy, of supply chains, of technology, this will be a very, very different world.”

On Tuesday, China’s envoy in Washington issued one of Beijing’s clearest denials yet that it had any advanced warning of Russia’s war. China has made “huge efforts” to push for peace talks and threats from U.S. officials that China would suffer consequences if it attempts to help Russia evade sanctions were “unacceptable,” Ambassador Qin Gang wrote in the Washington Post.

“Assertions that China knew about, acquiesced to or tacitly supported this war are purely disinformation,” he wrote. “Had China known about the imminent crisis, we would have tried our best to prevent it.”

China has already paid some costs for not publicly condemning Russia’s attack on a sovereign nation. The war has prompted comparisons between Putin’s effort to reclaim what he sees as lost lands and China’s own territorial claims to places like Taiwan. Analysts attributed at least some of the recent market declines in China to concerns that Beijing would ultimately fall into Moscow’s camp.

“China is very carefully hedging its bets,” said Alexander Gabuev, a senior fellow and the chair of the Russia in Asia-Pacific Program at the Carnegie Moscow Center. “There’s this support for kind of Russian legitimate concerns about European security architecture and criticism toward NATO, but that’s also a way to say that American-led alliances are bad.”

Any losses China has suffered so far pale in comparison to the pain of being drawn under the unprecedented sanctions regime that has crashed Russia’s currency, prompted an exodus of foreign companies and cut Moscow off from key technology imports. That led some prominent Chinese analysts like Hu Wei, a vice-chairman for the State Council-affiliated Public Policy Research Center, to advocate for a clear break from Russia “as soon as possible” so China can “save itself from isolation.”

An essay laying out Hu’s advice was quickly struck from China’s highly censored internet, where commentary backing Russia and criticizing the U.S. dwarfs support for Ukraine and news of civilian casualties. Still, the piece showed that some in China were concerned about where the country is heading after four decades of economic growth driven by closer ties with places like Europe, Japan and the U.S.

China’s support of Russia could turn out to be a “poisonous pill,” Natixis SA chief economist Alicia Garcia Herrero said, warning that investors are beginning to lump the two together. “When companies begin to talk about possible new projects they are starting in China, they are now beginning to say, ‘Wait a minute, I don’t want to end up investing in an autarky like Russia,'” she said.

At the same time, Russia’s invasion has put greater international scrutiny on Taiwan, “which is likely to see greater Western support to the detriment of PRC ambitions there,” said Elizabeth Wishnick, senior research scientist at Virginia-based research institute CNA, referring to the People’s Republic of China.

“Xi has a lot to lose since he is personally invested in the relationship with Putin,” she added. “The apparent failure of his Russia policy to bring strategic dividends — and to bring strategic losses instead — would harm his effort to extend his term in office.”