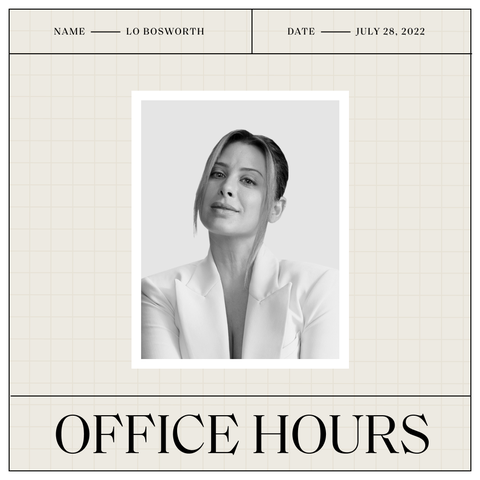 In ELLE.com’s monthly series Office Hours, we ask people in powerful positions to take us through their first jobs, worst jobs, and everything in between. This month, we spoke with Lo Bosworth, who you likely remember from The Hills, arguably the most iconic reality series of the 2000s. Since 2016, she’s distanced herself from Hollywood and pivoted to the health and beauty world, serving as the founder and CEO of feminine body care brand Love Wellness. “I spent the years of 16 to 24 working on television and not being able to control my narrative or how I was being portrayed,” she tells ELLE.com. “It was always somebody higher up on the cutting room floor.” Now, Bosworth is owning her story—and the feminine care space—with her growing company and forthcoming book, Love Yourself Well. Here, she talks transitioning out of the spotlight, how she became an entrepreneur, and advice (or non-advice?) she’d give her younger self.

When I was in middle school, there was a program in Laguna Beach called Park Night where the older students⁠ would babysit all the kids in the neighborhood. Parents would come to the local park a couple of nights a week and pay $10 or $20 to drop their kids off for two or three hours. I think I got paid 20 to 40 bucks a night. It felt like The Baby-Sitters Club, but on a smaller scale.

After The Hills wrapped, I was pretty disillusioned with being “talent” [laughs], but I was still deeply entrenched in the entertainment industry, so I ended up working for a sports talent agency for about a year. It was particularly hard for me because my experience in Hollywood was that your next paycheck is never guaranteed, and you’re constantly waiting for the phone to ring hoping that somebody wants to hire you. And being on the other side of it turned out to be even worse, because people were looking to me for that sense of security, to call them and say, “Hey, you got this job.” More often that not, you don’t get the job. It wasn’t fun to be the bearer of bad news all the time. I wound up quitting after a year, and that’s when I moved to New York City, in 2012.

How I transitioned from reality TV star to entrepreneur

First, I went to culinary school. I was even in early negotiations with The Food Network and the Cooking Channel to have a show when they decided to walk away from the project, which is what happens in entertainment all the time. It was that experience that ultimately made me realize that content creation has the ability to be fully democratized: everybody is a creator, and everybody can own their own story. After making peace with the fact that I was in a position of privilege, in terms of having a platform and an audience, I started to create content, but on my own terms. I supported myself in that way for many years and launched Love Wellness in 2016. I didn’t take a salary for three years and was just living off Instagram posts. Being a CEO is where I feel most comfortable, because I just want to be in control of my own destiny.

Why I launched Love Wellness

Eighteen months before I started Love Wellness, I was very unwell—and it happened overnight. It took that amount of time, different doctor’s appointments, a lot of medical gaslighting, and self-advocacy to discover that my depression, anxiety, and recurrent yeast infections were being caused by some pretty severe vitamin deficiencies, and a microbiome imbalance in my gut. I was at the drug store constantly, buying old-school legacy brand products and trying to figure out what could work for my body. Ultimately, it was a combination of prescription medications and amazing probiotics that are made specifically for women’s vaginal and urinary tract health that helped me get better and pave a path forward.

I realized then that there was not an innovative, education-first brand when it came to women’s personal care. And I felt like, with my experience and my platform and audience, I could share what I had learned. So I invested every dollar I had left from The Hills and creating content, basically my nest egg, into starting my business. I built the first website myself, did all the customer experience, and cold-called manufacturers. We launched with five personal care products, which are still available today and are our best-sellers. I started to learn and understand that there is a really meaningful audience for feminine body care that works, that is mission-driven, focused on innovation, and cares about women’s bodies.

Also, I started the brand because I felt embarrassed about buying products in the tampon aisle. I would double-bag every time I went to CVS. I thought, “Could I create a vaginal suppository that you could hold in your hand and actually makes you feel joy?” I set out to create that emotional experience for women when it came to needing products for our bodies. If you happen to need an anti-fungal, do you really need to be made to feel like it’s the end of the world and you should hide it in your bathroom cabinet? No! You want a brand and a product that makes you feel excited about the relief that’s about to come.

Advice for starting your own business

If you have had a personal experience and solved your own problem, then you probably have a great business idea on your hands. The opportunity to start new businesses is still limitless. I think we’re at a point where everybody thinks all of the good ideas are taken, but that’s simply not true, because as humans continue to evolve, there are problems left and right. It doesn’t matter if people don’t believe you or buy into it. If you go back and Google the very first articles that were written about Love Wellness, they were not positive—they made fun of me, the business, and everything that we were doing. That tune has changed significantly since we’ve grown to scale. We’re a best-selling brand at Target; people take us seriously. Don’t buy into the negativity that people may throw your way.

Why I chose to stay behind the scenes

It was definitely an intentional decision. There’s still bias against people who have been on a reality TV show, and I’m fully aware of that. For the brand to have the best opportunity it possibly can to help people, me being behind the scenes [of the company] is critical. I don’t really care if you like me or dislike me; if the products work for you, that’s all that matters. I don’t care if you know that I’m the CEO. It doesn’t do anything for me or my ego, I’m just happy to have the opportunity to create something that works.

The biggest misconception about my job

When people discover that it is my company, they assume that I’ve been hired by a private equity firm to be the face. I’m like, “No! I actually did this on my own and invested all my own money, and I lead product innovation. This is my universe.”

Understanding that everybody has value and everybody brings something to the table. The kind of brutality I observed in Hollywood is not something that I’m interested in perpetuating in my everyday life or in my business at all. In that world, you’re either the chosen one or you’re not. Your talent is a commodity, and in a different type of setting, your brain and your creativity and your value are just as important. You don’t have to be the popular kid to live a fulfilled and important life.

Advice I’d give to my younger self

I frankly don’t know if I would give my younger self advice, because experiences, good or bad, are meant to be experienced, and it’s the only way that you learn and grow. I wouldn’t go back and do it differently. It’s formed me into who I am today.

My approach to making change in the feminine care space

If you want to change your life and own your narrative, you have to stick with it. I’ve been doing this for six years, day in and day out, and a lot of people did not buy into this at first. The reason we’re successful today is because I never deviated from the path. If you really believe in it, it will happen.

This interview has been edited and condensed for clarity.

Claire Stern is the Deputy Editor of ELLE.com. Previously, she served as Editor at Bergdorf Goodman. Her interests include fashion, food, travel, music, Peloton, and The Hills—not necessarily in that order. She used to have a Harriet the Spy notebook and isn’t ashamed to admit it.