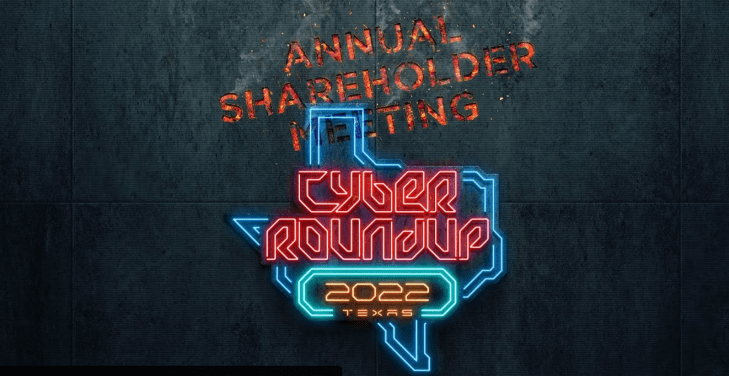 Tesla will kick off Thursday afternoon its annual meeting — rebranded Cyber Roundup — from its Austin headquarters, an event that promises to deliver customary pomp and pageantry, thumping beats and some newsworthy comments from its CEO Elon Musk.

There are 13 shareholder proposals on the agenda, including one for a 3-for-1 stock split. That proposal, which appears to have enough support to pass, helped push Tesla shares up 0.40%. Shares are up nearly 10% since Friday.

Investors, fans, critics and, well, anyone else can watch the event via livestream on YouTube (right below). The meeting begins at 4:30 pm CT/5:30 pm ET.

The company has stopped accepting questions, which will be posed to Musk and perhaps CFO Zachary Kirkhorn and Drew Baglino. However, readers can view the list of questions and see which ones have been up-voted by heading to the dedicated webpage provided by Say Technologies.

If the positive reception to Tesla’s proposal last March is any indication, it appears most investors are keen to see the stock split approved. If the measure passes, it would be the second time in two years the company has split the stock.

Tesla’s proposals on the agenda include the election of two directors, eliminating applicable supermajority voting requirements and reducing director terms to two years.

Notably, Tesla’s board will get smaller. Oracle co-founder Larry Ellison, who joined the board in 2018 as part of a settlement with U.S. securities regulators over Musk’s infamous tweets about taking the company private, is leaving and his spot will not be filled. Venture capitalist Ira Ehrenpreis and Walgreens executive Kathleen Wilson-Thompson are up for re-election.

Shareholders have also made proposals, all of which Tesla has recommended voting against. Among those on the list are requirements that Tesla report annually on anti-harassment and discrimination efforts as well as board diversity, the right for employees to unionize and measures that would force the company to provide additional information on water risk and child labor.