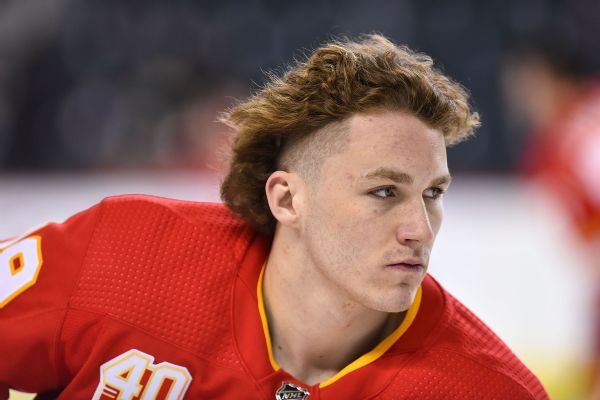 Matthew Tkachuk says he’s ready for the Battle of Florida after waging the Battle of Alberta for the first six years of his NHL career.

“I hate Edmonton, but I hate Tampa more now,” said Tkachuk, who was traded by the Calgary Flames to the Florida Panthers in a blockbuster deal on Friday night.

Tkachuk was introduced by the Panthers at a news conference on Monday, having signed an eight-year, $76 million contract extension. Florida acquired the 24-year-old forward and a conditional fourth-round draft pick for star forward Jonathan Huberdeau, defenseman MacKenzie Weegar, prospect Cole Schwindt and Florida’s lottery-protected first-round selection in the 2025 NHL draft.

The Tampa Bay Lightning have won two of the past three Stanley Cup championships and have eliminated the Panthers from the playoffs in two straight postseasons.

He goes from a hockey-wild city in Calgary to a market that has room to grow. As evidenced by his opening salvo against the Lightning, Tkachuk believes his personality could become a selling point for the franchise.

“I bring a certain swagger that will really help this team [on the ice]. Off ice, I have the same personality,” Tkachuk said. “I’m excited for the chance to grow the game down here. I hope that in a few years, nobody on the team can walk outside without somebody saying something to them, like how it is in some of the other places around the league. I have a good confidence. It’s not a cockiness. I think some of these teams in this conference that have had success have that. The team on the other end of the state has that.”

Panthers general manager Bill Zito compared Tkachuk to both a unicorn — “Don’t take that too seriously,” he cautioned his newest player — and the character Jimmy Chitwood from the movie “Hoosiers” during the news conference.

“At the end of the movie, he says, ‘Coach, I’ll make [the shot].’ It’s that type of confidence. Gimme the ball. He wants the shot,” Zito said.

The Panthers GM said the trade for Tkachuk came together last week, with the player’s agent reaching out to express Tkachuk’s willingness to sign long-term in South Florida. His refusal to do so in Calgary led the Flames to seek a trade for the restricted free agent forward. It meant the Flames would lose both of their leading scorers this summer, Tkachuk and Johnny Gaudreau, who signed with the Columbus Blue Jackets on the first day of NHL free agency.

Getting Tkachuk meant parting ways with Huberdeau and Weegar, who will be unrestricted free agents next summer. The Panthers’ split with Huberdeau was stunning, given that he was their leading scorer last season and perhaps the franchise’s biggest star.

“You gotta give to get. It was a situation that came up in a very, very short window,” Zito said. “When you have an opportunity like this, you have to pursue it.”

The trade was unrelated to any contract talks with Huberdeau or Weegar, Zito said.

“When you have a chance to add a player like Matthew to the organization, the price is steep. That’s how things went down,” he said.

Tkachuk said he doesn’t see himself as replacing Huberdeau, the leading scorer in Panthers history. “I’m a different type of player,” Tkachuk said. “I don’t feel pressure. I’m here to win. Personal [stats] can get thrown out the door. I’m here to be the last team standing. I’m not comparing myself to anybody.”