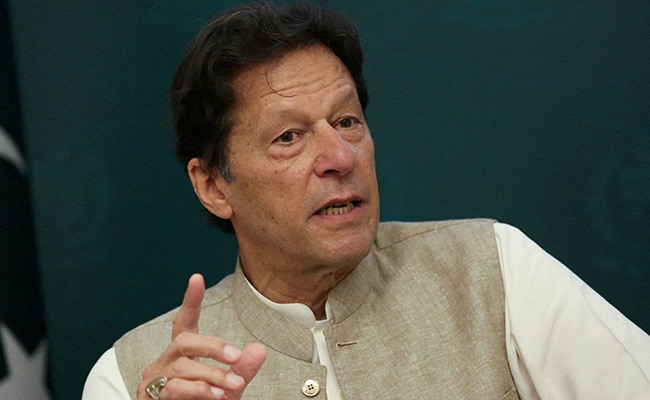 Imran Khan is facing his toughest political test since assuming office in 2018. (FILE)

Pakistan’s embattled Prime Minister Imran Khan on Tuesday strictly directed his party lawmakers to either abstain or not attend the National Assembly session on the day of voting on the no-confidence motion against him, which is likely to be held in the first week of April.

The instructions came a day after Pakistan’s opposition on Monday tabled the no-trust motion in the National Assembly against Khan, who is facing his toughest political test since assuming office in 2018 as defections in his party and cracks in the ruling coalition appeared to have made his position fragile.

In a letter to the PTI lawmakers, Prime Minister Khan, who is the party’s chairman, said: “All the members of the in the National Assembly shall abstain from voting/not attend the meeting of the National Assembly on the date when the said resolution is set out on the agenda,” Geo News reported.

All members are “required to adhere to his directions in true letter and spirit” and should keep in mind the “intention behind the provision of Article 63(A) of the Constitution of Pakistan,” he said.

Khan also warned the party lawmakers that “every or any” violation of the directions would be treated as an “express defection” in terms of Article 63(A).

No Prime Minister in Pakistan’s history has ever been ousted through a no-confidence motion, and Khan is the third premier to face the challenge.

The lower house will convene on Thursday to debate the motion.

Interior Minister Sheikh Rashid has said that the voting on the no-confidence motion will be held on April 3.

“There will be a debate on the no-confidence motion on March 31, followed by voting on April 3,” he said, adding that Khan would emerge victorious.

Prime Minister Khan needs 172 votes in the house of 342 to foil the bid to topple his government. Since Khan’s allies are still not committed to support him and about two dozen lawmakers from within the ruling Pakistan Tehreek-e-Insaf have revolted, the situation was still fluid.

Meanwhile, the government said on Tuesday that it was willing to share a “letter” with the chief justice of the country which the prime minister waved at a rally as proof of a foreign “conspiracy” to topple him.

In a massive show of strength, Khan on Sunday addressed a mammoth rally in the national capital where he claimed that foreign powers were involved in a conspiracy to topple his coalition government. He pulled a document from his pocket to exhibit it for the charged crowd, saying it was the letter sent to threaten him.

Addressing a press conference along with Information Minister Fawad Chaudhry, Minister for Planning Asad Umar claimed that he saw the letter himself and said that the prime minister was ready to share with the chief justice.

“Obviously, it is the highest office of justice in Pakistan, it is a huge position that has respect in this country. Personally too, the chief justice has a very good reputation. The prime minister said that if necessary, and for the people’s satisfaction, he is ready to present the letter to the chief justice of the Supreme Court,” Umar said.

Umar said that the letter was written before the no-confidence motion submitted against the prime minister on March 8 but it clearly mentioned the no-trust move which makes it a matter of concern.

“So it is clear that the foreign hand and no-confidence motion are linked. These are not two separate things and we see a clear connection between them,” said Umar.

He, however, refused to make the contents public and even sharing it with the opposition as demanded by its leaders. But he said that the letter had been shared with the top civil and military leadership and a few members of the cabinet.

Umar also said that former prime minister Nawaz Sharif, who is living in London, was one of the “characters” mentioned in the letter that was a testimony of the conspiracy to topple the government.

Information minister Chaudhry claimed that Sharif had held meetings with Israeli diplomats. “This is why I was saying that he should not be allowed to go abroad, because when such people go abroad they become a stooge, a weapon of the international establishment,” he said.

The presser by the two ministers came after the opposition accused the prime minister for faking up the letter and asked the government to share it.

“If there is real threat from abroad to the security of the country, then we are with the government,” Pakistan Muslim League-Nawaz (PML-N) leader Ahsan Iqbal said.

Former prime minister Shahid Khaqan Abbasi asked the government to summon a session of parliament on Wednesday and share the letter with the lawmakers.

“A threat has been made to our country and we have to respond to it collectively. This is not just about Imran Khan and his two ministers,” he said.

He asserted that the prime minister should either take the parliament into confidence over the letter or apologize.

The development comes a day after the opposition alliance in a power show on Monday night vowed to bring down the government of Khan.

The Pakistan Democratic Movement (PDM), which among others include PML-N and Jamiat Ulema-e-Islam Fazl (JUI-I), organised a big rally on the Srinagar Highway in Islamabad.

PML-N vice president Maryam Nawaz, daughter and heir of former premier Nawaz Sharif, accused Khan of putting down his most trusted Punjab Chief Minister Usman Buzdar to save his power after the government decided to replace him with Chaudhry Pervez Elahi to win the support of his Pakistan Muslim League-Quaid party, which has five lawmakers in the lower house.

Khan came to power in 2018 with promises to create a ‘Naya Pakistan’ but miserably failed to address the basic problem of keeping the prices of commodities in control, giving air to the sails of opposition ships to make war on his government.

No Pakistani Prime Minister has ever completed a full five-year term in office.