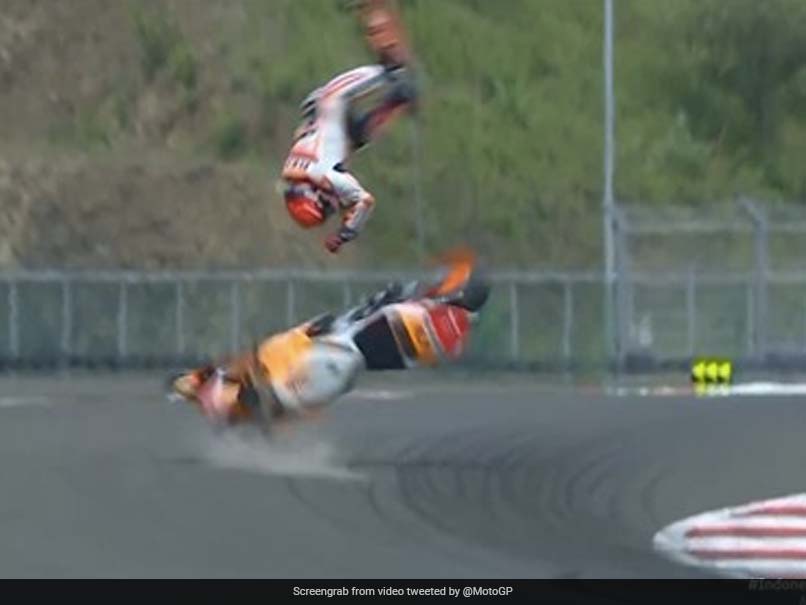 Indonesian MotoGP: Marc Marquez had a horrific crash during warm-up on Sunday.© Twitter

Marc Marquez missed out on the Indonesian MotoGP after a horrific warm-up crash before the start of Sunday’s race, which was also delayed by heavy rain. The six-time world champion was thrown off from his bike on turn seven during the morning’s 20-minute warm-up session at the Mandalika International Street Circuit. After he was catapulted from his bike, his Honda also somersaulted mid-air as the Spaniard landed heavily on his left arm and hit his helmet on the ground.

Visibly shaken, Marquez got up and walked away cautiously.

Ruled out with concussion, his Honda team put up a statement on social media which said, “@marcmarquez93 has been declared unfit after examination in local hospital and by the circuit staff and doctors.”

Marquez had already suffered a bruising weekend, after two crashes during qualifying on Saturday.

The start of the race was delayed for 75 minutes due to heavy rain, with grand prix racing returning to Indonesia for the first time in a quarter of a century.