Katrina Kaif and Vicky Kaushal celebrated their first Holi as a married couple with Vicky’s family. Katrina posted pictures from her Holi with the Kaushals – Vicky’s mother Veena, father Sham and brother Sunny. It was plainly a relatively restrained Holi – at least at the time the photos were taken – since all five participants in the family Holi have only a few smears of red gulaal on their faces (though Sunny seems on the verge, we have to say). In the second photo, Katrina shares an affectionate moment with mother-in-law Veena Kaushal who is known to be very fond of her.

“Happy Holi,” Katrina Kaif captioned the post. Shweta Bachchan and Zoya Akhtar returned the greeting in the comments section – Katrina will soon start work on Jee Le Zaraa, to be produced by Zoya and directed by her brother Farhan.

“Happy Holi Katy, may our life be filled with the colours of love and happiness always,” Katrina Kaif’s trainer and friend Yasmin Karachiwala wrote.

Katrina Kaif and Vicky Kaushal were the life of Karan Johar’s party for Dharma Productions CEO Apoorva Mehta in Mumbai on Thursday night. Katrina and Vicky, who married in December 2022, showed up together, holding hands; both looked sharp, she wore a blue minidress. Katrina and Vicky, who still have the newlywed glow, thrilled the gathered paparazzi with some PDA, posing together in the most moonstruck manner. 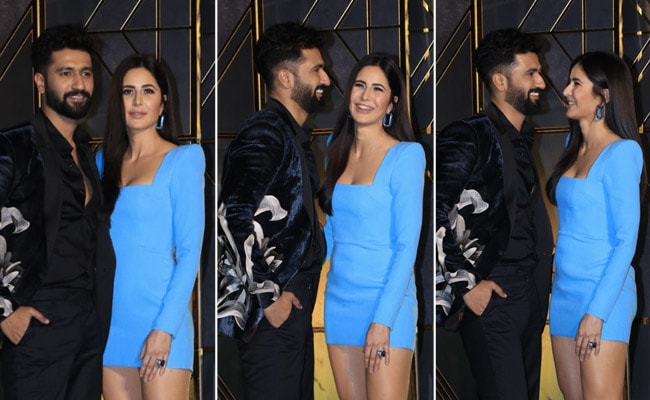 Hard to believe now but Katrina Kaif and Vicky Kaushal were Bollywood’s most private couple not too long ago, up until their wedding last year. The couple, who dated for a couple of years and managed to keep the romance absolutely classified, married in true blue Punjabi style. The destination wedding was held in a fort-palace at Sawai Madhopur in Rajasthan. The ceremony was preceded by a mehendi and a sangeet. The guest list was very select and the newlyweds flew straight out to a honeymoon in the Maldives.

Katrina Kaif is currently working on the third film in the Tiger series with Salman Khan; Vicky Kaushal recently wrapped a movie with Sara Ali Khan.