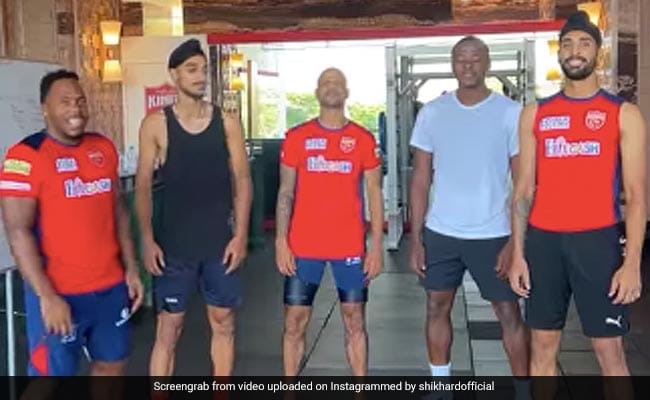 The IPL 2022 is up and running and teams are now looking to gain much-needed momentum to keep their campaign on track. Punjab Kings are playing their second game of the season on Friday evening against the Kolkata Knight Riders and the franchise will look to register their second win on the trot. Ahead of the fixture, PBKS stars Shikhar Dhawan, Arshdeep Singh and Kagiso Rabada were seen showing some dance moves during a gym session.
Dhawan posted a video on his Instagram account and in that, he can be seen dancing alongside Kagiso Rabada, Odean Smith, Arshdeep Singh and Harpreet Brar. He captioned the post as: “Punjabi tadka aur Caribbean Masti. #TeamBonding.”

In the match between KKR and PBKS, the former won the toss and opted to bowl first. KKR made one change as they brought in Shivam Mavi in place of Sheldon Jackson. Kagiso Rabada is also back for the Punjab Kings in the playing XI.

In their opening game, Punjab Kings had outclassed Royal Challengers Bangalore and they chased down 206 to register their first win of IPL 2022 season. Now the franchise will look to keep their winning momentum going.

In the match against RCB, Punjab Kings stars Odean Smith, Bhanuka Rajapaksa impressed with the bat and the overseas signings will look to continue with their dominant show.

On the other hand, KKR have won one game and lost one game. In their last encounter, KKR suffered a narrow-defeat against RCB. Wicketkeeper-batter Dinesh Karthik took RCB over the line but KKR’s fighting spirit was on show as the franchise made a match out of it even after posting below par 128.