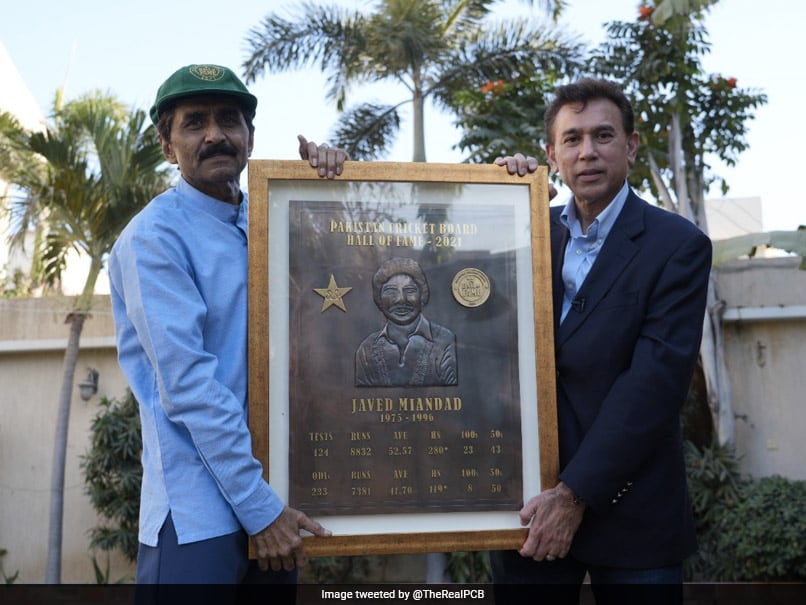 Javed Miandad was formally inducted into the PCB Hall of Fame.© Twitter

Former Pakistan skipper Javed Miandad on Saturday was formally inducted into the Pakistan Cricket Board’s (PCB) Hall of Fame. PCB Chief Executive Faisal Hasnain presented him with a commemorative cap and plaque. Miandad, who played for Pakistan between 1975-1996, amassed 16,213 international runs with 31 centuries in 357 matches. The 64-year-old is one of the only two men’s cricketers who have played in six different ODI World Cups. Miandad said he felt honoured after being inducted into PCB’s Hall of Fame.

Javed Miandad has been formally inducted into the PCB Hall of Fame pic.twitter.com/WJ4NgBFRPP

“I feel humbled and honoured to have been inducted into the PCB Hall of Fame. It is appropriate that these inductions are taking place when an international cricketer is at the helm of Pakistan cricket affairs as he understands better than anyone else the hard work and sacrifices a cricketer makes to reach to the top pedestal,” Miandad said a statement released by the PCB.

“Every time I stepped on to the field of play, I wanted to contribute for my team and country through my performance. To make this happen, I developed my own training and preparation plans using innovative methods visualising the oppositions and conditions I would encounter. I am delighted my efforts produced good results and I was able to serve my team and country with performances that made us a proud cricketing nation,” he added.

“I was fortunate to always have had excellent and outstanding contemporaries who supported and encouraged me and I want to especially thank the people of Pakistan for their overwhelming support and love till date. This always remained my inspiration and motivation in the pursuit for excellence,” Miandad signed off.