Who says weekends are meant for indulgences alone? Actress Kareena Kapoor Khan is testimony to the fact that it is possible to eat healthy food even when it’s the weekend. Saturday was salad day for Kareena Kapoor Khan. After indulging herself with carb-rich food like biryani and halwa during the week, Kareena decided to take the healthy way out and relish a healthy salad. In a recent post on Instagram Stories, she shared an image of a bowl of Rajma Salad. That’s not it. Her caption has our heart. “I don’t only eat biryani and halwa, you see,” Kareena Kapoor wrote on the image, with the GIF, “Eat well, Be well”.

Take a look at the story that she shared: 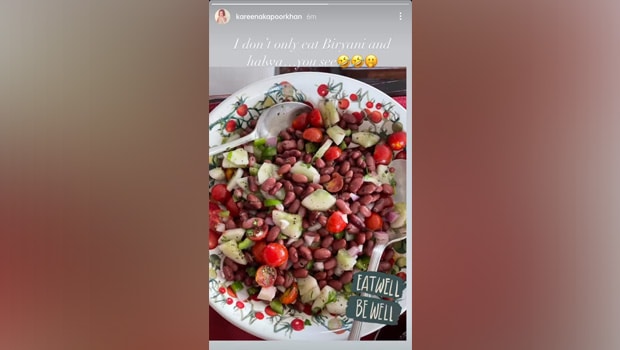 Kareena Kapoor Khan was caught eating healthy on a Saturday!

The salad had the freshness of herbs and veggies, with Rajma or kidney beans as the main ingredient. It had most of the healthy ingredients like cucumber, nuts, capsicum, cherry tomatoes and coriander leaves. It was dressed with salt and pepper only, as Kareena Kapoor Khan appeared to have avoided cheese.

Kareena Kapoor Khan shared this post exactly a day after she said “bye” to biryani and halwa because her yoga instructor Anshuka followed her on Instagram. That post accompanied a video that showed the Kabhi Khushi Kabhie Gham actress trying multiple complex yoga poses. “When your yoga instructor follows you on Instagram, you know it’s time to say bye to the biryani and halwa,” she said. Take a look:

Just before that, Kareena had shared a post in which she was seen enjoying biryani and had captioned the video as “Monday blues biryani… Already planning tomorrow’s dessert.”

(Also Read: Not Pickles, This Is What Kareena Kapoor Khan Craved The Most During Pregnancy)

If you too feel you should give a break to biryani and relish the humble salad, here’s how to make a salad just like Kareena Kapoor Khan’s – Greek Salad with Lemon Dressing. The secret to preparing a bowl of salad is to keep it simple. Also, salads carry multiple benefits. They offer a variety of fruits and vegetables in one serving. Besides, they supply fibre in ample amounts and cut calorie consumption. They make you feel fuller for longer hours, thus increasing the duration between meals. Salads provide water and help cool the body down. In fact, cucumbers and certain lettuces are 96 percent water, while berries contain around 92 percent water.

What did you think of Kareena Kapoor Khan’s salad? Tell us in the comments below.