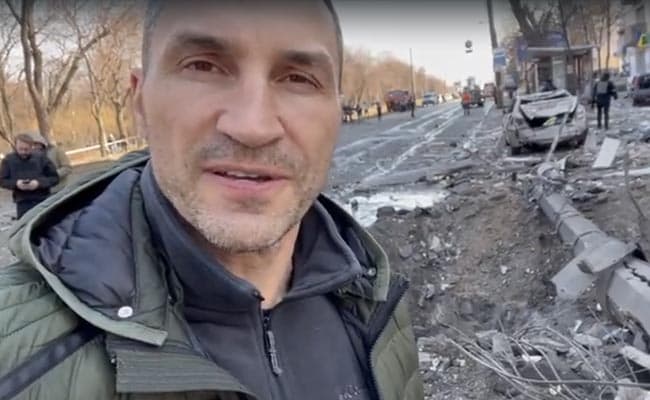 Mayor of Kyiv Vitali Klitschko, standing amidst destroyed buildings in the capital city, recorded a video walkabout showing the devastating scenes from the Russian war against Ukraine.

“That’s what Russians’ war against civilians looks like. Destroyed buildings, destroyed infrastructure. City bus just got hit by the rocket. Lives are getting lost. There’s the war that Russia started,” said Mr Klitschko, a former heavyweight boxing champion who has been mayor of the Ukrainian capital since 2014.

Putin’s dream of creating a Greater Russia is my country’s nightmare. #SaveUkraine#kyiv#StopPutinsWar#Standtogether#FreeUkraine#WeAreAllUkrainians#StandWithUkraine#StopTheWarpic.twitter.com/EKw3K6BsbZ

“This is the city of Kyiv and many cities in Ukraine were destroyed, lives were taken. That’s the truth. These images are the truth of Russian war against Ukraine. That’s what it looks like,” Mr Klitschko said signing off.

Diplomatic efforts to end the war in Ukraine are stepping up, with Ukrainian and Russian negotiators set to talk again after both sides cited progress over the weekend.

The United Nations refugee agency UNHCR reported that nearly 2.7 million people had fled Ukraine as of Saturday, nearly 1.7 million of them heading to Poland.

On February 24, Russia began a special operation to demilitarize and “denazify” Ukraine, responding to calls for help from the Donetsk and Luhansk people’s republics in countering the aggression of Ukrainian troops.