Welcome to ESPN’s LIVE coverage of the 2021-22 Champions League final! Premier League giants Liverpool take on LaLiga champions Real Madrid in a repeat of the 2018 final.

The match in Paris kicks off at 3 p.m. ET / 8 p.m. ET, and you can follow all the prematch build-up as well as that key moments and talking points from the match as it happens right here from Chirs Wright and our team of writers at the Stade de France. Just refresh the page to get the latest updates.

Thiago has just given Keita a hug that seems to suggest Keita is starting this game.#LFC

After both finishing top of their group, Liverpool (who won all six of their Group A games) and Real Madrid have had to see off some heavy hitters on the way to the final. Jurgen Klopp’s side dispatched Inter Milan, Benfica and Villarreal in the knockout rounds while Carlo Ancelotti led his team past Paris Saint-Germain, Chelsea and Manchester City in a series of comeback wins.

Real are W10 L1 D1 in the competition this season, with their one defeat coming in their shock 2-1 home loss to Moldovan minnows Sheriff Tiraspol. Liverpool, meanwhile, are yet to be beaten with a record of W8 L0 D4. The Spanish side have scored 30 goals and conceded just 13 goals in 12 games thus far, while the English side have scored 28 and allowed 14. Both have kept four clean sheets.

Having already become the first manager in history to win the title in all of Europe’s big five leagues this season, Real Madrid boss Carlo Ancelotti is finishing off his stellar campaign by leading a team into the Champions League final for the fifth time in his career, another record.

Jurgen Klopp is doing so for a fourth time, which puts him joint-second with a whole host of luminaries including Sir Alex Ferguson, Marcelo Lippi and Miguel Munoz, Real Madrid’s great coach of the 1940s and ’50s.

Ancelotti could become the first coach to win four European Cups, having already won twice with AC Milan in 2003 and 2007, and Real in 2014.

By that same token, a loss for Klopp would mean the German would draw level with former Juventus boss Lippi as the manager who have suffered the most defeats in Champions League finals with three (after losing the Bayern Munich with Borussia Dortmund in 2013 and against Madrid for Liverpool in 2018).

– Ogden: Ancelotti, the players’ coach, on brink of UCL history 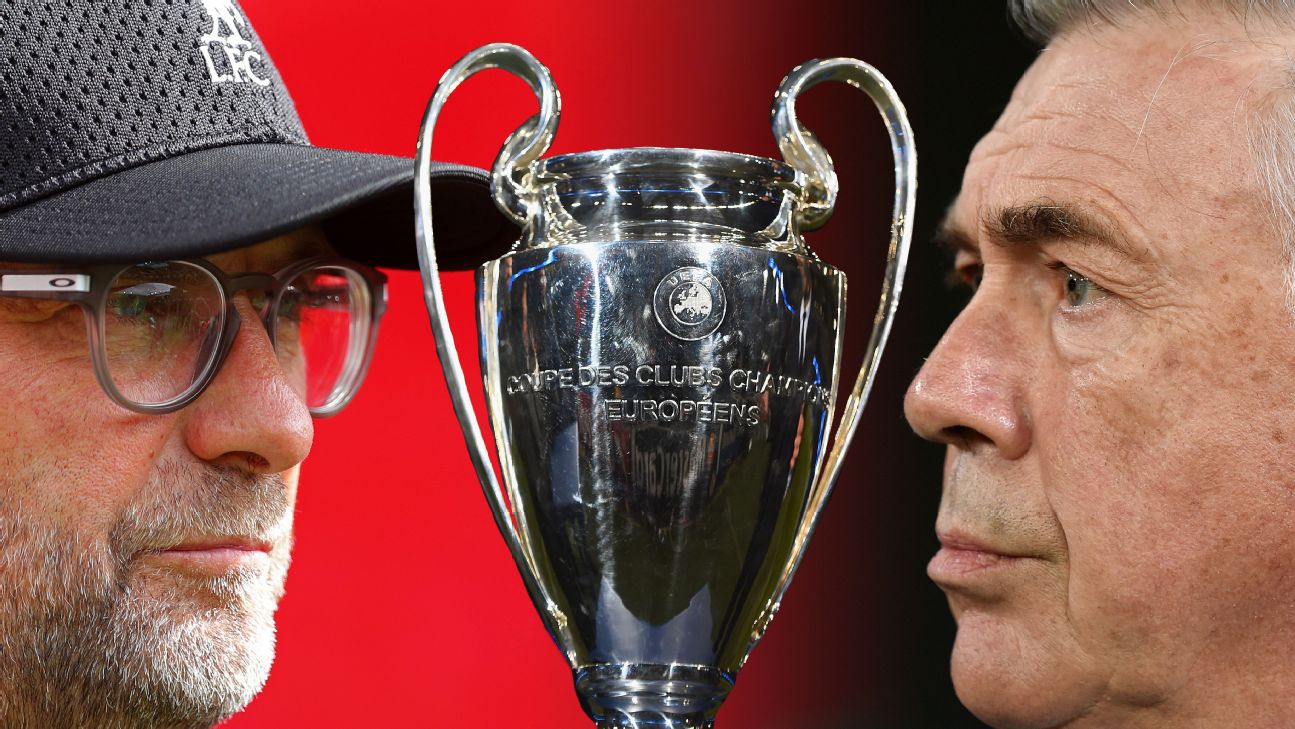 Benzema has also scored a career-high 44 goals in 45 games for Real in all competitions this season, with Robert Lewandowski of Bayern Munich (50 goals) the only player in all of Europe’s top five leagues to have registered more in 2021-22. Two more goals in the final would see the Frenchman equal the all-time record for goals scored in a single Champions League season, which is currently held by former Real teammate Cristiano Ronaldo (17 goals in 2013-14).

Benzema has 10 goals in his last five Champions League games which is a record for a five-game span in the knockout stages of the competition that he also shares with Ronaldo (10 goals in five games in 2017).

Only three players have ever scored a hat trick of more in a European Cup final — Alfredo Di Stefano (in the 1960 final) and Ferenc Puskas (1960, 1962) of Real Madrid, and Pierino Prati of Milan (1969). However, Benzema scored hat tricks in back-to-back Champions League games against PSG and Chelsea en route to this season’s final, so don’t bet against him joining that exclusive club.

Liverpool’s top scorer in Europe is Mohamed Salah (eight goals) meaning that the Egypt forward would have to embark on an unprecedented spree in the final to overtake Benzema in the race for the Golden Boot.

Some issues outside the ground and it’s noticeable inside Stade de France that the Real end is pretty full and still lots of gaps in Liverpool section, with fans in big queues still waiting to get in

Special congratulations are in order for Jordan Henderson who is captaining Liverpool in a third Champions League final and therefore joins some incredibly illustrious company in doing so.

The midfielder has worn the armband in as many European Cup/UCL finals as Milan legend Paolo Maldini and Real Madrid icon Paco Gento and is only one game behind the likes of Franz Beckenbauer and Franco Baresi.

There are other reports of confusion over entry that is causing some stress outside the Stade de France.

Sad to relate it’s chaos outside, police funelling fans into dangerously narrow routes – because their fans are parked blocking the pavement. Dangerous crush building up behind… pic.twitter.com/Rqzt90MCdn

The 2022 final will be contested by teams who represent the two most successful nations in European Cup history, with England and Spain producing a total of 32 winners between them (18 from Spain and 14 from England).

As such, Liverpool are bidding to become the first English side in 41 years — since Liverpool in 1981 — to successfully beat a team from Spain to lift the European Cup.

Big news in the Liverpool team — Thiago Alcantara and Fabinho both start, despite being injury doubts ahead of the game. And in defence, Ibrahima Konate is chosen ahead of Joel Matip alongside Virgil van Dijk. Thiago had been the biggest doubt, having limped out of the win against Wolves six days ago with a tweaked hamstring. The Spain midfielder trained on Friday, but the big question mark will be about how long he can last against Real. — Mark Ogden

That team in full…

Here’s how we line up for the #UCLfinal

Liverpool’s team bus has had a struggle to get through the traffic to make it to the Stade de France. Jurgen Klopp and his players are only just arriving now, having been temporarily stuck in traffic on the motorway close to the stadium. So while Real’s players are now beginning to stroll onto the pitch to get an early feel for their surroundings, Liverpool’s team are still waiting to get off the bus. — Mark Ogden

Starting with the 1981 final, Liverpool beat Real in all three of their first meetings in the knockout phases of the European Cup/Champions League and all without conceding a single goal.

Since then, Real have gone unbeaten (W2 L0 D1) in the three most recent knockout meetings between the pair, including the 2018 final.

Is it mind games or is it genius? At roughly 1 p.m. ET, two hours before kickoff, Real boss Carlo Ancelotti had his team-sheet printed. No going back now, sir…

Real Madrid have gone early with their team by announcing their starting XI a full hour before it has to be submitted to UEFA. Coach Carlo Ancelotti has selected Fede Valverde ahead of Rodrygo in his front three. Casemiro, Luka Modric and Toni Kroos start in midfield as expected — six years after starting in the 2016 Final against Atletico Madrid in Milan. — Mark Ogden

And here’s the full team sheet…

Liverpool and Real Madrid are no strangers when it comes to the Champions League, having met in the final twice before, first in 1981 and then again in 2018. The Reds took first blood in ’81 with a narrow 1-0 win in Paris, while Real wrought their vengeance almost four decades later by winning 3-1 in Kiev. As such, the 2022 final represents the very first “three-peat” meeting (i.e three finals between the same two sides) since the European Cup was inaugurated in the 1955-56.

Speaking of the magic number, Jurgen Klopp’s hopefuls are also seeking to become the first English club to win a “cup treble” by adding the Champions League to the League Cup and FA Cup they have already won this season. No other English side have ever reached the final of all three competitions in the same campaign.

Overall, the 2022 final is only the ninth encounter between Liverpool and Real Madrid in Europe’s elite tournament and the Spaniards have a slight edge when it comes to their previous encounters (W4, L3, D1), scoring 10 goals in that time compared to the Red’s total of eight.

Furthermore, Liverpool have not beaten Real in the Champions League since 2008-09 when they thrashed them 5-0 on aggregate in the round of 16. A single goal from Yossi Benayoun was enough to secure a 1-0 win at the Bernabeu in the first leg before Rafa Benitez’s side stormed to a 4-0 victory at Anfield in the return leg. The Reds then exited the tournament in the next round after losing 7-5 on aggregate to Premier League rivals Chelsea.

The 125th and last Champions League game of the season takes place in Paris tonight with a final between two of the most-decorated clubs in the history of the competition — Liverpool and Real Madrid.

Liverpool have become the first English club to reach 10 European Cup finals and do so chasing their seventh title. If successful, they would move joint-second on the all-time list, level with AC Milan.

However, they find themselves up against the undisputed kings of the continent in Real, who have appeared in more finals (17) and lifted the trophy aloft (13) than any other team. Another win for the Spanish giants tonight would see them claim the cup for a fifth time in nine years.

But who do you think will win? Vote in our poll.