Mira Kapoor’s food adventures are known to one and all. The foodie loves to indulge in exotic dishes and desi food. What’s more? She keeps posting about them on her social media handles too. Recently, the social media sensation made us drool with the photo of a scrumptious snack. She shared a sunset postcard on Instagram Stories. At her table, we see a cup and a bowl of bhel. The bowl is brimming with chopped tomatoes, fresh coriander leaves, crispy sev and some papdi on the side. She captioned the image, “Just me and my bhel.” We would love to have this Indian snack as comfort food on such beautiful sunsets, right? Take a look at Mira Kapoor’s post: 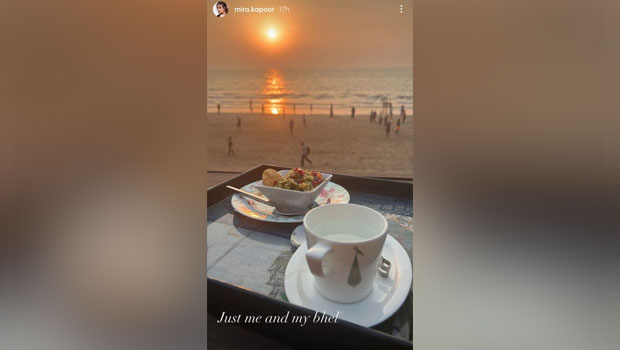 It’s not just the bhel that has won Mira Kapoor’s heart. She loves to indulge in comfort drinks too. And, guess what’s her go-to beverage. If you’ve been following her, you’ll know that Mira is a die-hard coffee lover. So, she recently dived into a large cup of coffee. She had it with some delicious-looking breadsticks and chips. Interesting, isn’t it? She captioned the image, “Back in action.” We do relate, don’t we? Read more about it here.

Recently, Mira Kapoor and her husband and actor Shahid Kapoor had a fun banter over food. Believe it or not, the two started a “war” over burgers. When on a picnic, Mira ate away the middle portion of Shahid’s burger. Given that the centre of a burger is the juiciest and most filling portion, we know her action would have some consequence. She posted a photo of herself and wrote, “When I ate the middle of SK’s burger.” That’s not all. The picnic also featured a “war of veggie burger.” She asked her fans to choose between Aloo Tikki burger and McVeggie burger. That’s quite a task, don’t you think? Shahid Kapoor also posted a photo from the picnic and wrote, “This is war.” Nevertheless, the two ended up entertaining their fans with this “war” over food. Foodies loved it. Click here to know all about the war of the burger.

Recently, Mira Kapoor also gave us a glimpse of Shahid Kapoor’s scrumptious birthday cake. The cake was cut out in the shape of letters S and K. The cake letters were embellished with berries, macarons and layers of cream. We all drooled over the photos. Read about it here.

Mira Kapoor’s food diaries are so relatable. Don’t you think so?