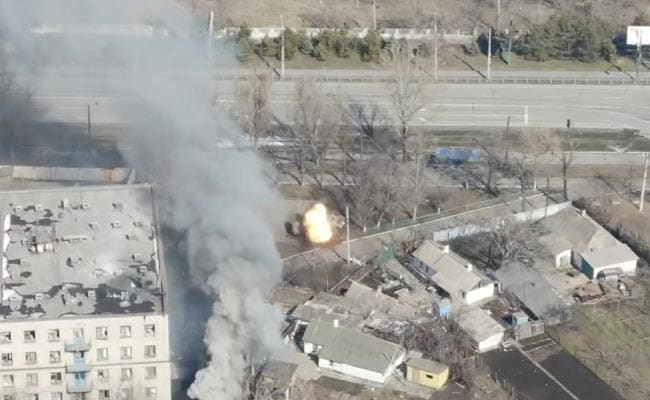 A long-scheduled NATO summit in Madrid in June would look at longer-term changes for the alliance. (File)

NATO is worried Russia is gearing up to carry out a chemical attack in Ukraine, secretary general Jens Stoltenberg said Tuesday, ahead of a meeting of the alliance’s defence ministers.

NATO, he said, remains “very vigilant” on that risk and stressed that Russia would have “a high price to pay” if it carried out such a “violation of international law”.

He refused to “speculate about any any military response from the NATO side” if such a chemical attack happened.

Wednesday’s meeting, Stoltenberg said, would cover “concrete measures to reinforce our security for the longer term in all domains” to adapt to the changed threat environment arising from Russia’s “senseless war”.

“This could include substantially more forces in the eastern part of the alliance at higher readiness and with more pre-positioned equipment,” on top of the bolstered NATO forces already sent to NATO countries bordering Ukraine, he said.

A long-scheduled NATO summit in Madrid in June would look at longer-term changes for the alliance.

“It’s important to distinguish greatly about the immediate response — all the tens of thousands more troops, air power and naval power — and then the more long-term adjustment or posture,” to be discussed in June, he said.

Asked about rumours of a possible NATO summit in Brussels next week with leaders including US President Joe Biden, Stoltenberg demurred.

“We are able to convene a NATO summit with NATO leaders on short notice but I cannot go into more details about that now,” he said.

Presidents and prime ministers of the European Union — which accounts for most NATO members — are already to gather in Brussels next Thursday and Friday for a summit focused on Russia’s war in Ukraine.