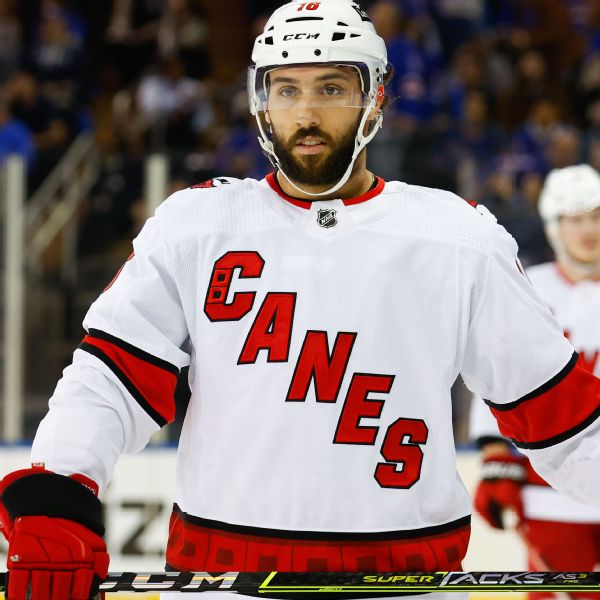 The New York Rangers have signed center Vincent Trocheck to a seven-year deal after his big playoff performance, sources tell ESPN’s Emily Kaplan.He will make $5.625 million against the salary cap.

Trocheck played for Rangers coach Gerard Gallant when both were with the Florida Panthers from 2014-17. The Rangers had a need at center after letting Ryan Strome walk to free agency and when Andrew Copp, acquired at the trade deadline last season, opted to sign with the Red Wings.

More was expected from the Carolina Hurricanes in the postseason, and a second-round loss to the New York Rangers — with a seventh game on home ice — is a sting that won’t go away anytime soon. But Trocheck, who anchored the second line from his center position, was not to blame. He led the Hurricanes with six postseason goals, and he finished with 31 shots on net in 14 games, averaging 18:21 time on ice along the way.

Acquired by Carolina in 2020 — just in time for the Hurricanes to rise into the elite category of the Eastern Conference — the Pittsburgh native completed his free agent résumé in coach Rod Brind’Amour‘s system. He graduated from 17 goals in 2020-21 to 21 last season, and although his career high in points (75) is still way back in 2017-18 on a developing Florida Panthers team, it’s his credentials from Carolina that made him among the more appealing players available this summer.

Trocheck has the skill and speed to beat defenses with his offense, and the tenacity and toughness to frustrate them along the way, a combination that has resulted in a lucrative contract during a month in which he turned 29.