As shared e-scooter companies have infiltrated cities and e-bike sales have soared, micromobility has been offered up as a panacea to save us all from the ill humors and packed streets caused by gas-guzzling cars. However, one of the major roadblocks in front of well-intentioned city dwellers who’d love to trade in their cumbersome and environmentally unfriendly vehicles for an e-bike or scooter remains: What happens when it rains?

Nimbus, a Michigan-based electric vehicle startup, wants to solve that problem with a simple solution: Put a roof on it.

The company recently came out of stealth with a prototype for its Nimbus One, a tiny, three-wheeled EV that “combines the convenience and cost of a motorbike with the safety and comfort of a car.” 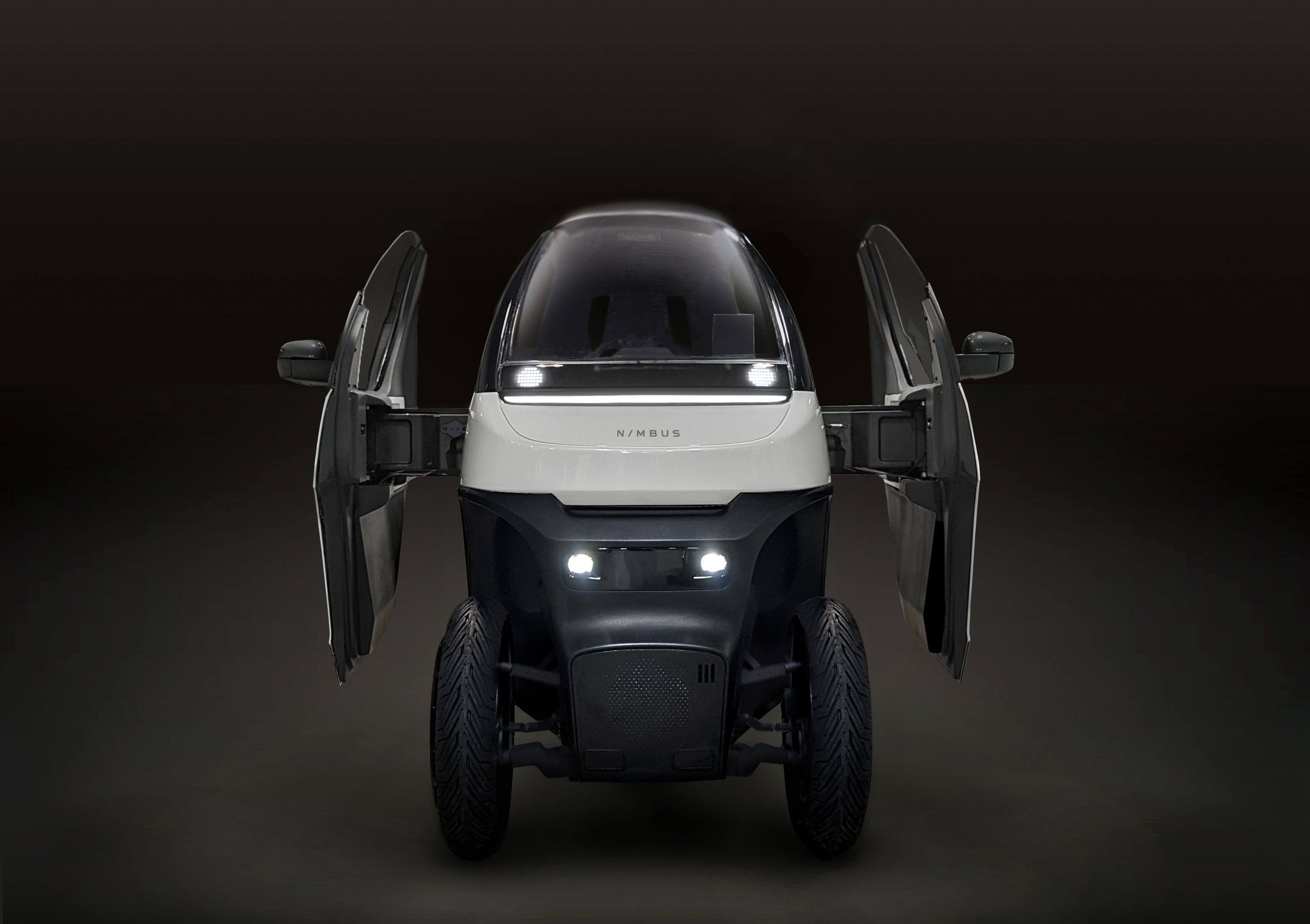 The Nimbus One. Image Credits: Nimbus

The thin, pod-like vehicle is only about 2.75 feet wide and 7.5 feet long, which Nimbus says makes it three to five times smaller than a compact car — the better to park and navigate busy urban streets. It also has room behind the driver’s seat for another passenger or storage for things like grocery runs. Nong said the Nimbus’s backseat will have ISOFIX points for baby seats.

The vehicle also tilts, like a motorbike or scooter would, due to Nimbus’s proprietary tilting technology.

“Scooters are fun, but they’re also kind of dangerous, but they lean, so that’s fun,” Nong told TechCrunch, noting the front airbag in the Nimbus. “Our vehicle does the same thing, but it takes the skill out of it. So my mom can get in and start to drive. Have you ever driven a boat? It drives kind of like a boat. You turn left and it pitches to the left.”

The Nimbus One is classified as an auto-cycle in the U.S., which means it’s “the best of both worlds,” according to Nong.

“We don’t have to pass these stringent, very expensive and lengthy processes for getting our vehicles certified,” Nong said. “But also, drivers don’t need a motorcycle license to drive, so anybody with a car license can use our vehicle. They don’t have to wear a helmet.”

Since the Nimbus is made for city driving, not highway driving, it has a top speed of 50 miles per hour. Its 9 kWh battery has a range of 93 miles and a charge time of 1.2 hours on a Level 2 charger or 5.4 hours on household power, according to the company. Taking a page out of Gogoro’s book, Nimbus’s batteries are removable, swappable and can be charged in the owner’s own home. 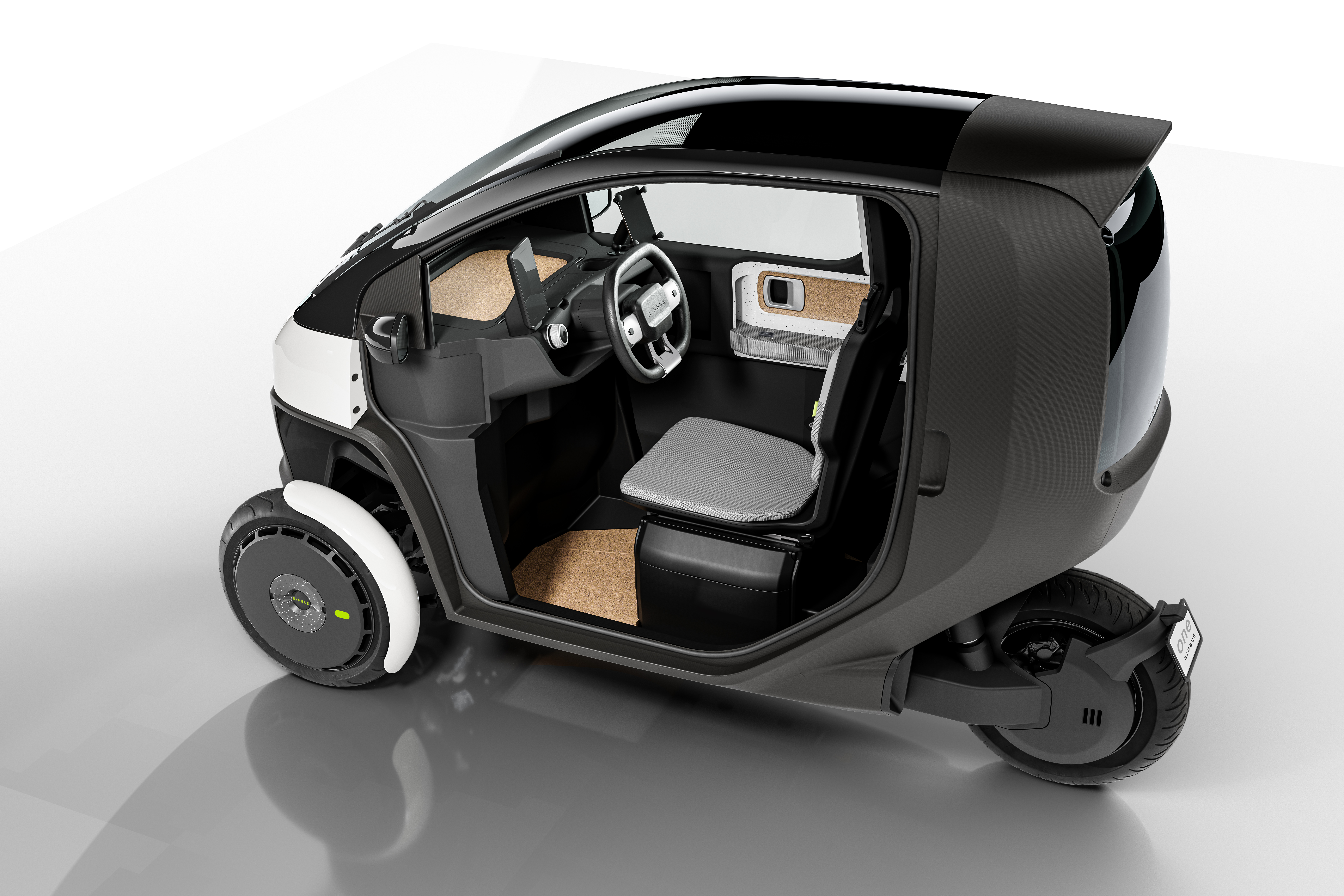 The Nimbus One’s minimalist interior includes a display screen, Bluetooth-connected speakers, power windows, a rapid phone charger, heating and optional air conditioning. The vehicle also has a front-collision warning and additional features can be sent to the vehicle with over-the-air updates, according to the company.

Pre-orders for the Nimbus One started over the weekend, and test drives will be offered to enterprise customers within a month, said Nong, who noted the company is taking $100 down payment per order. The vehicles themselves will cost around $9,980 to buy outright, but the company also intends to offer them as a subscription service for $200 per month.

Nimbus expects first deliveries from impending pre-orders to come in the third quarter of 2023, but the company hasn’t yet chosen its launch city. Nong said Nimbus will roll out city by city, in part so the company can set up proper after-sales service to maintain vehicles in each city as it grows.

Nong says that while he expects most of Nimbus’ business to come from direct to consumer sales, the startup is also in talks with several shared micromobility operators, other vehicle sharing programs and food and grocery delivery companies. All vehicle functions, like door locks, power windows, speakers and even steering, braking and vehicle speed can be controlled via Nimbus’s central control unit and accessed via API, making the vehicles highly compatible for a vehicle-sharing program. In addition, up to four 2.2 kWh swappable battery packs can be equipped with the vehicle, a feature that has the potential to cut overhead costs associated with charging shared fleet vehicles.

Of course, manufacturing costs for any vehicle have never been higher than they are today, so Nimbus will need to raise another round to make it to production. The startup wants to raise $20 million in equity and $10 million in debt for its Series A, as well as bring on a customer who is also a strategic investor.

Nimbus closed a $4.7 million seed round last August and expects investors from that round — Thiel Capital, the JAM fund, Conscience, Ponooc and Gaingels — to follow on into the next round.

“As cost of living in cities becomes untenable for young people and as they increasingly adopt sustainable energy, Nimbus will provide them with the perfect blend of both: an affordable, lightweight, convenient electric vehicle that serves their basic needs,” Jesse Michels, an investor at Thiel Capital, told TechCrunch. “From a market perspective, it’s the only EV company with 35% margins that should improve with scale. It has the safety profile of a car with the fun and agility of a motorcycle. Longterm, Nimbus should revolutionize urban mobility and do what Tesla is doing up-market, for younger people and urbanites.”

This article has been updated with a quote from Thiel Capital.

Correction: A previous version of this article stated the company was based in California, and that it plans to produce vehicles in Q3 2022.