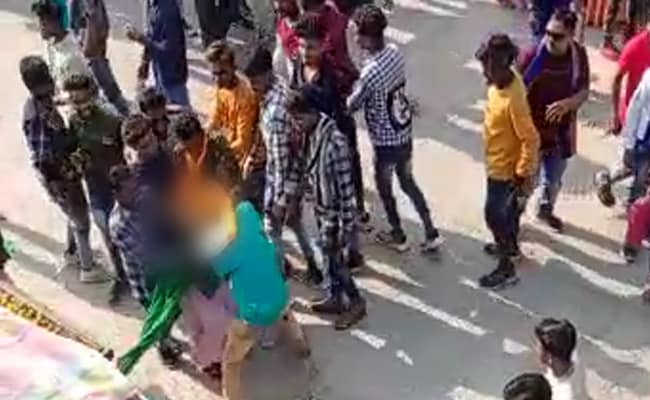 A disturbing video shows two young women being sexually assaulted by a group of men during a popular tribal festival in Madhya Pradesh. The clip begins with one of the women appearing to hide behind a vehicle when a man, passing by the spot, assaults her.

She gets rescued by a passerby who pulls the man away from her. But her ordeal doesn’t end here. A few moments later, another man is seen forcing himself on her. He then drags her towards a group of men where several of them are seen trying to grope her.

In the same frame, the other woman is seen being assaulted by a man.

Several men are seen recording the incident on their phone but no one comes to the women’s rescue.

The week-long Bhagoria festival began on Friday in the districts of Alirajpur, Jhabua, Dhar, Barwani and Khargone. Local administration and police have claimed that they have made proper security and other arrangements to cater to thousands of people. But the horrid incident on the very first day of the festival has put a question mark on the claims of the administration.

Superintendent of Police, Alirajpur, Manoj Kumar Singh told NDTV, “After filing the FIR, two accused have been taken in custody but the main accused is missing, all of them have been identified. We came to know about the video yesterday and took suo motu action as no complaint was registered by the victim. We have formed several teams and all of them will be arrested soon.”

Bhagoria is one of the biggest and famous annual events in the tribal-dominated districts of Madhya Pradesh.