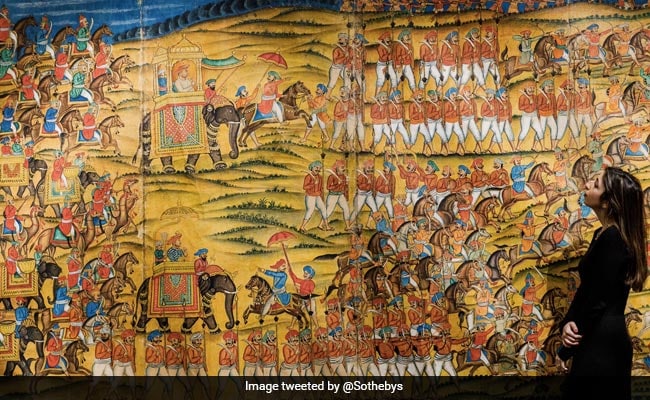 A vividly illustrated painting depicting a historic victory of Mysore ruler Haider Ali and his son Tipu Sultan over the East India Company in 1780 went under the hammer in London on Wednesday for whopping 630,000 pounds (Rs 6.28 crore).

‘The Battle of Pollilur’, which took place on September 10, 1780 as part of the Second Anglo-Mysore War, was the centrepiece of the Arts of the Islamic World and India sale at Sotheby’s auction house.

As a visual record of the battle and to commemorate his victory, Tipu Sultan had commissioned a painting of the Battle of Pollilur as part of a large mural for the newly-built Daria Daulat Bagh in Seringapatam in 1784.

“What this painting has is the terror and anarchy and violence of battle. It’s arguably the greatest Indian picture of the defeat of colonialism that survives. It’s unique and fantastic artwork,” said Sotheby’s expert William Dalrymple, author of ‘The Anarchy: The Relentless Rise of the East India Company’.

“Tipu Sultan was probably the most effective opponent that the East India Company ever faced. Tipu showed that the Indians could fight back, that they could win… the first time that a European army is defeated in India is this Battle of Pollilur,” he explains.

According to the auction house, three existing copies of the original Pollilur painting are known – three details in a miniature in the Baroda Museum, 24 preparatory paintings depicting sections of the series, and the complete panorama sold this week, comfortably beating its lowest guide price of 500,000 pounds.

The painting extends over 10 large sheets of paper, nearly 32 feetlong, and focuses in on the moment when the East India Company’s ammunition tumbril explodes, breaking the British square, while Tipu’s cavalry advances from left and right, “like waves of an angry sea,” according to Mughal historian Ghulam Husain Khan.

At Pollilur, Tipu Sultan – known as the Tiger of Mysore – inflicted on the East India Company what has become known as the most “crushing defeat” ever and the painting captures the “sheer energy” of that victory.

Another highlight at the auction was “A gem-set and enamelled gold shield” from 19th century Jaipur, which outperformed its guide price range of between 40,000 pounds and 60,000 pounds to go under the hammer for 258,300 pounds.

#AuctionUpdate Crafted in Jaipur in the 19th century, the densely decorated enameling of this beautiful shield features a menagerie of creatures.

“This magnificent shield must have been crafted to commemorate a particular event; several shields were presented to the Prince of Wales during his visit to India in 1875-76, all luxuriously enamelled and set with precious stone,” Sotheby’s said.

“The colour scheme and the motifs in the roundels are comparable to contemporaneous Jaipur craftsmanship,” it said.