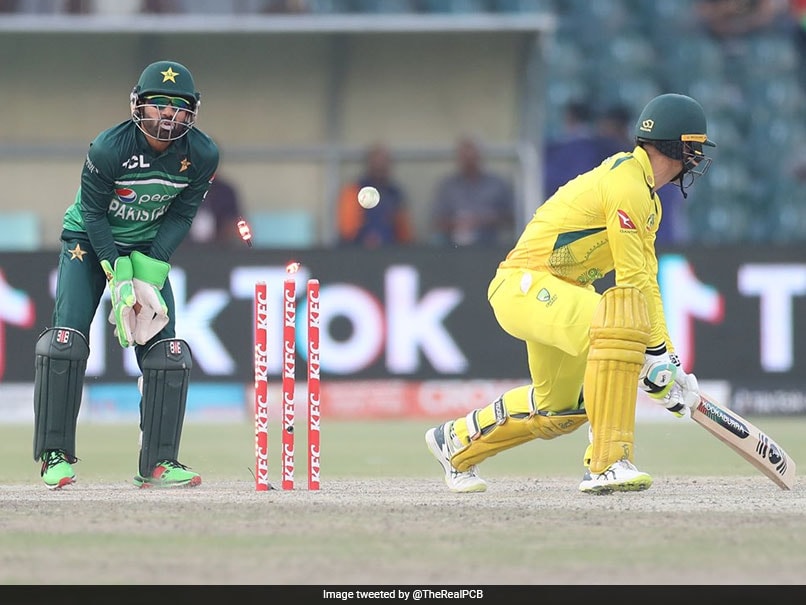 Alex Carey’s attempted reverse-sweep did not work out very well for him.© Twitter

Alex Carey had a disappointing showing with the bat during Australia’s first ODI against Pakistan at the Gaddafi Stadium in Lahore, on Tuesday. Carey could only muster four runs off four balls, before losing his wicket to Zahid Mahmood in dramatic fashion. In the second delivery of the 40th over, Carey received a full toss and tried to reverse-sweep it but he failed to connect as the ball went around his legs and smashed the stumps.

Here is the video of Carey’s dismissal:

Travis Head was in splendid form during Australia’s innings and smashed 101 runs off only 72 balls. The opener also hammered 12 fours and three maximums.

Cameron Green was unbeaten at 40 runs off 30 balls as Australia posted 313 for seven in 50 overs, setting a target of 314 runs for Pakistan.

Haris Rauf and Mahmood were in good bowling form for Pakistan and took two wickets each.

In their chase, Imam-ul-Haq scored a fine century for Pakistan, but it was not enough as Australia registered a thumping 88-run victory, bowling the hosts out for 225.

The spinners shone for Australia with the ball as Adam Zampa claimed four scalps and Mitchell Swepson and Travis Head took two wickets each.

Having won the Test series 1-0 before this, Australia have taken a 1-0 lead in the ODI series.