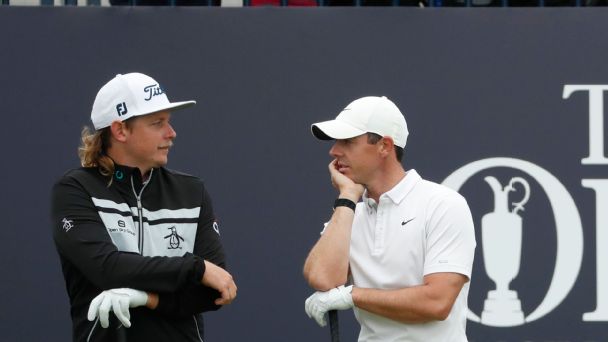 The 2021 major championship season has come and gone, but the three FedEx Cup Playoffs events are just around the corner.

While Scottie Scheffler, the only four-time winner on the PGA Tour this season, remains No. 1 in the Official World Golf Ranking, he is no longer at the top of these rankings.

With the start of the FedEx Cup Playoffs just two weeks away, at the FedEx St. Jude Championship, here are the latest PGA Tour Power Rankings:

The Australian golfer has already won nearly $10 million this season, thanks to victories in two of the sport’s biggest events — the Players ($3.6 million) and The Open ($2.5 million). He has climbed to No. 2 in the Official World Golf Ranking, the highest of his career.

Scheffler remains No. 1 in the world after he picked up his first four career victories, including his first major at the Masters, this spring. He also tied for second in the U.S. Open. Scheffler has earned more than $13.1 million this season, most ever by a player in a single PGA Tour season.

McIlroy’s eight-year drought without a victory in a major will continue into 2023. Still, he was the most consistent player in the majors this season. His 29-under aggregate score is the lowest of any player who made the cut in each of them — and 8 shots better than Will Zalatoris, who was second. He’s only the third player in the past 50 years to finish eighth or better in all four majors in the same season.

With Smith winning at St. Andrews, Schauffele and Patrick Cantlay will head into the 2023 season as the best players in the world without a major championship win. Schauffele has been picking up plenty of trophies lately, though. He won the Travelers Championship and then the Scottish Open the next week. In between, he also finished first at the JP McManus Pro-Am, a 36-hole charity event in Ireland.

Thomas ended a nearly five-year drought without a major by taking home his second Wanamaker Trophy at the PGA Championship at Southern Hills. JT has finished in the top 10 in half of his 18 starts on tour this season. He ranks in the top five in shots gained approach the green (.855), tee to green (1.716) and total (1.938).

After finishing in the top 10 in each of the four majors in 2021, Rahm didn’t do that in a single one this season. He tied for 27th at the Masters, tied for 48th at the PGA Championship, tied for 12th at the U.S. Open and tied for 34th at The Open. Even with a win at the Mexico Open, Rahm’s game has been just a tick off this season.

The reigning FedEx Cup Player of the Year doesn’t have an individual victory this season; he did team with Schauffele to win the Zurich Classic of New Orleans in April. Still, Cantlay has nine top-10s and 11 top-25s in 16 starts this season. His tie for eighth at The Open halted a disappointing slide in the majors.

Fitzpatrick waited three seasons to pick up his first professional victory on American soil and finally landed a big one — the U.S. Open at The Country Club in Brookline, Massachusetts. He followed that up with a tie for sixth at the Scottish Open and tie for 21st at The Open. His transformation over the past couple of years has been impressive.

Young probably wrapped up PGA Tour Rookie of the Year honors when he finished solo second at The Open. He tied for third at the PGA Championship. He is only the second player since 1958 to finish in the top three in his debut at both The Open and the PGA Championship; Collin Morikawa is the only other player to win both in his first start. Young is one of the longest hitters off the tee on tour, averaging 317.6 yards. He ranks second in shots gained off the tee (.942).

Morikawa hasn’t had a bad season, but his play hasn’t lived up to the incredibly high expectations he set by winning the 2020 PGA Championship and the 2021 Open Championship in his first starts in those events. He has seven top-25s in 16 starts this season, including solo second at the CJ Cup @ Summit and a tie for second at the Genesis Invitational. He was fifth at the Masters and tied for fifth at the U.S. Open. Morikawa missed the cut in his past two starts in the Scottish Open and The Open.

The 2020 Masters champion’s strange summer continued at last week’s 3M Open. On the par-5 18th hole, his ninth hole of the opening round, Matsuyama hit his ball into the water three times and took a quadruple-bogey 9. He withdrew after the round because of a sore wrist. In June, Matsuyama was disqualified from the Memorial because of a white substance on the face of his 3-wood. He has also been plagued by neck and back injuries. Still, Matsuyama has won twice this season and finished fourth at the U.S. Open.

Hovland had his best chance in a major at The Open, in which he entered the final round tied with McIlroy at the top of the leaderboard. Hovland shot 2-over 74 and finished tied for fourth. Hovland hasn’t won since the unofficial Hero World Challenge in December, and his top-5 at St. Andrews ended a nine-start streak of finishing outside the top 15. The Norwegian golfer is one of the most talented players in the world, but his work around the green has been a mess. He recently hired short game coach Josh Gregory, who was Patrick Reed’s coach at Augusta State, to help him turn things around.

Spieth salvaged what had been a disappointing majors campaign with a tie for eighth at The Open. He has six top-10s in 19 starts, including a victory at the RBC Heritage in April. Spieth used to be one of the best putters in the world, but his work with the flat stick has been pretty bad this season. He ranks 146th in shots gained putting (-.144). He ranks 199th on tour from 3 feet, 157th from 4 feet and 199th from 5 feet.

Homa, who won the Fortinet Championship and Wells Fargo Championship earlier this season, missed the cut at The Open. He didn’t let his poor showing at St. Andrews affect his sense of humor. Whether it was taking a swipe at Henrik Stenson, who gave up the European Team captaincy for the Ryder Cup to join LIV Golf …

Or tweeting about his wife’s “pregnancy brain,” Homa is still winning on social media.

My wife’s “pregnancy brain” has begun and it’s nice to know we’re finally on a level playing field, mentally. I’ll share some stories as they happen if ur into laughing at pointless mishaps

Horschel picked up his seventh PGA Tour victory at the Memorial in June. He also tied for second at the Arnold Palmer Invitational and was second in the Zurich Classic team event. His performance in the majors probably wasn’t what he had hoped for, but he tied for 21st at The Open, his first top-25 in eight starts in the event. While Smith lifted the Claret Jug, Horschel reeled in a 30-foot kingfish when they teamed up in a fishing tournament off the Florida coast on Friday.

From hitting greens to sailing the big blue. The @PGATOUR is in the house!@BillyHo_Golf reeled in a 30 pounder with Captain Cam Smith at the helm. . pic.twitter.com/n2gYlOznME

The start of the 2021 season was a struggle for Finau, but he felt his form was headed in the right direction over the past couple of months. He tied for second at the Mexico Open and was solo second at the RBC Canadian Open. It finally came together for him at the 3M Open, where he erased a 5-shot deficit in the final round to pick up his third PGA Tour victory. The win moved Finau from 11th to seventh in the standings for the Presidents Cup. The top six players in the standings will make the U.S. team; captain Davis Love III also has six selections.

Niemann, a wire-to-wire winner at the Genesis Invitational in February, hasn’t yet been in contention at a major. But the 23-year-old from Chile has made the cut in the past nine majors, which is something only two other PGA Tour players have done. Rahm has made the cut in 13 consecutive majors; Robert MacIntyre has in 10 straight.

After tying for eighth at the Masters, his second top-10 at Augusta National in three starts, Im’s major championship season didn’t go as planned. He had to withdraw from the PGA Championship after testing positive for COVID-19 while in South Korea, missed the cut at the U.S. Open and then tied for 81st at The Open. He tied for second at the 3M Open, his seventh top-10 in 22 starts this season.

Lowry is still searching for his first victory since the 2019 Open Championship at Royal Portrush. He has had a couple of nice highlights this season, including a tie for third at the Masters and a memorable two-hole sequence at The Open. He had consecutive chip-in eagles on Nos. 9 and 10 at St. Andrews, both par-4s. He became the first player in 21 years to have back-to-back eagles in The Open; Phil Mickelson did it on consecutive par-5 holes at Royal Lytham in 2001.

Give Kisner credit for being a grinder. After barely making the cut at level par at The Open, he made six birdies on the front nine in the third round for a 6-under 30, which was one off the record in an Open Championship at St. Andrews, set by Tony Jacklin in 1970. Kisner carded a 7-under 65. He finished in a tie for 21st, his best finish in a major this season.

Talk about perseverance. Poston missed the cut in each of his first six starts this season. But then he tied for second at the Travelers Championship and won the John Deere Classic the next week, his second PGA Tour victory. He also tied for 11th at the 3M Open. Poston was the third wire-to-wire winner at the John Deere, following Scott Hoch in 1980 and David Frost in 1992.

Riley is coming off a missed cut at the 3M Open, but he has enjoyed a pretty solid rookie season on tour. The former Alabama star has nine top-25s and six top-10s in 25 starts. He finished second at the Valspar Championship, tied for fourth in the Zurich Classic and the Charles Schwab Challenge and was fifth in the Mexico Open.

The former world No. 1 golfer isn’t playing as much — or as well — as he once did, but he has still put together a pretty solid season. He tied for 14th at the U.S. Open and tied for 15th at The Open. Earlier, he tied for fourth at the Genesis Invitational and tied for ninth at the WGC-Match Play. At least he’s saving his best for the tour’s biggest events.