Some of the biggest names in the sport are heading to Hollywood to take aim at the Dodger Stadium bleachers in the 2022 All-Star Home Run Derby on July 18 (8 p.m. ET on ESPN). The following day, more of the league’s stars will take the field for the 2022 All-Star Game.

Headlining the derby is back-to-back derby champion Pete Alonso. How do the rest of the participants stack up to the home run king? Can anyone take the belt from the Mets slugger known as “Polar Bear”? And who will win the Midsummer Classic?

Who is going to win the Home Run Derby and whom will he beat in the final?

Gonzalez: Soto was not happy to be thrown into trade rumors right before the All-Star break, and this is the perfect place for the game’s best pure hitter to channel his anger. Soto has been scorching hot this month and will dethrone Pete Alonso in the finals. He’ll do so by whacking a bunch of opposite-field homers, too.

Olney: Soto will go head-to-head with Alonso, and it’ll be like Ali-Frazier, with Soto barely edging the defending champion.

Passan: Alonso, of course. He’s the most prolific home run hitter on the planet. He knows how to win the derby, seeing as he’s done so the past two times. His most difficult test might come in the first round against Acuna, but they’ve faced one another before, in 2019, and the Polar Bear came out on top. He’ll do so again this year, thwarting NL East foe Soto in the finals.

Schoenfield: It’s the year of the Mariners! Rodriguez has been on fire, and he’s not lacking in confidence. He’s going to hit a bunch of low lasers into the left-center bleachers and, like Alonso in 2019, he’s going to win it as a rookie — knocking out Alonso in the semifinals and Schwarber in the final.

Who will hit the longest home run of the night and how far?

Gonzalez: Acuna is averaging 437 feet per home run this season, the longest in the majors. Dating back to his rookie year in 2018, he has hit 13 home runs 450 feet or longer, second to only C.J. Cron — even though he missed significant time with a torn ACL. Three years ago, Acuna homered to all fields, producing a beautiful spray chart, but he lost to Alonso in the second round. If he decides to get pull happy this year, he’ll clear Dodger Stadium a few times. One might even reach 510 feet.

Olney: Alonso will club a 512-foot homer, revitalizing conversation about a juiced ball.

Passan: The prodigious power of Soto is so free, so easy, one takes it for granted. In an event like the Home Run Derby, the number of home runs matters more than the distance when it comes to winning the event, but not hearts and minds. We want to see tanks. We want to see balls that never stop flying. We want to see Soto hit a ball 515 feet, and we will.

Schoenfield: There have been only five home runs hit out of Dodger Stadium during an action game — two by Willie Stargell and one each from Mark McGwire, Mike Piazza and Giancarlo Stanton. The longest of those was one of Stargell’s at an estimated 506 feet. We’re not only going to see a few fly out of the ballpark during the contest, we’re going to see a couple longer than 506. And the longest: Schwarber is going to crack a 522-foot home run.

Albert Pujols is participating in his final Home Run Derby tonight, what are your predictions for the 42-year-old?

The All-Star Game in Los Angeles is just around the corner. Is your favorite star headed to Hollywood? Full coverage »

Gonzalez: I have him shocking everybody by defeating Schwarber, the NL’s home run leader, in the first round. Don’t ever underestimate Pujols’ pride and competitiveness. He hasn’t been, well, Albert Pujols, because his bat speed is no longer quick enough to adjust to the cartoonish velocities of today’s game; it has nothing to do with his raw power. He knows this event, having competed in the first timed derby in 2015, and it’ll be Soto who swiftly eliminates him in Round 2.

Olney: He’ll get the second-biggest ovation of the night, and all the players will surround him to congratulate him after an impressive first round. But he won’t survive a really tough matchup against Schwarber.

Passan: He will have a better showing than expected, which is to say his first-round matchup against Schwarber will not end with Schwarber having a minute-plus left on the clock. Pujols is too competitive, too prideful, to allow that. But in the end, he will get respect for having pushed the top seed … but not the W he desires.

Schoenfield: One and done. I mean, not one home run. He’ll crack a dozen in the first round, but Schwarber will knock him out.

What’s the one moment we’ll all be talking about long after this HR derby ends?

Gonzalez: The final round. Soto versus Alonso. Two division rivals going at it. The best pure hitter of this generation against one of the most illustrious derby competitors ever, in a rematch of last year’s semifinals from Coors Field. It was largely happenstance that Soto and Alonso wound up on opposite sides of this year’s bracket, and it will ultimately produce one of the most electrifying rounds this event has ever produced.

Olney: Soto shuffling and dropping his bat after he puts up a huge number in the championship round.

Passan: An Alonso-Rodriguez matchup in the semifinals would be everything: king vs. prodigy, right-handed thunder vs. right-handed thunder, a could-be coronation vs. a national coming-out party. While Rodriguez may draw the ire of the crowd for ousting Seager, a longtime Dodger, in the first round, he’ll win them back with a show in the next round … only to be thwarted by the champ not yet ready to cede his crown.

Schoenfield: How about a passing of the torch? Rodriguez was 6 months old when Pujols made his first All-Star Game as a rookie in 2001. Now we have the game’s next big star on center stage. They won’t face each other unless they meet in the final, but I’m sure at some point we’ll get a Pujols-Rodriguez embrace — one generation to the next.

Who will win the All-Star Game and by what score?

The deadline is less than a month away. Which players could finish the season on a different team?

One player all 30 MLB teams should trade for (or away)

What should your team do?

Gonzalez: These All-Star Games are often decided late, with the reserves on the field, and the American League’s superior depth and talent will win out in the late innings. With Jose Ramirez, Byron Buxton, Xander Bogaerts, Alek Manoah and Emmanuel Clase coming in late, it’ll ultimately be a boat race — the first in 10 years.

Passan: The National League wins 2-1. At least that’s what my coin and die said.

Schoenfield: The American League has won eight in a row — make it nine, as the AL wins 5-4 with a late rally.

Who is your All-Star Game MVP pick?

Gonzalez: Shohei Ohtani has been pitching and hitting at dominant levels for more than a month, and he will continue to do so in the Midsummer Classic. He’ll be the easy MVP pick.

Olney: Aaron Judge, because the All-Star Game is a relay race of pitchers throwing as hard as they can — and nobody has done more damage on fastballs this year than Judge. Plus, he has had a knack for checking every box on his way to free agency and winning the MVP would be another.

Passan: In a close game, late-inning heroics lead to MVP trophies. So looking at the NL bench, it would be perfectly reasonable for Austin Riley — whose 11th-hour selection came 11 hours too late — to provide the timeliest of knocks.

Schoenfield: Easy. Julio Rodriguez, my friends. He comes off the bench and delivers the go-ahead home run in the eighth inning (off David Bednar, in case you’re curious).

What’s the one All-Star Game matchup you are most excited to see? 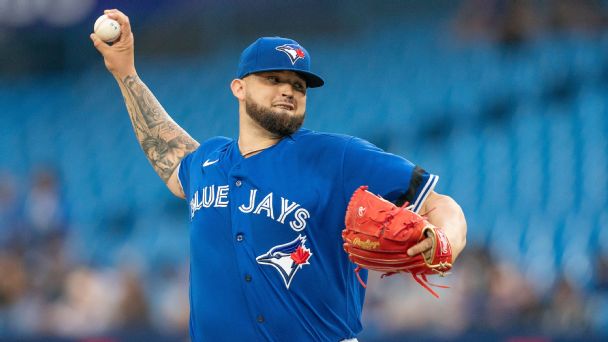 “It’s a dying breed. And it sucks.” Jeff Passan goes inside the decline of the starting pitcher — and what it means for baseball’s future.

Gonzalez: Ohtani has never faced Soto, either during the regular season or in the All-Star Game. It’s unlikely this year, too, given that Soto isn’t in the starting lineup and Ohtani, who might start, won’t throw more than an inning. But one can dream. And this is a dream matchup.

Olney: Ohtani vs. anyone, as a hitter or a pitcher — a reminder of how ridiculously unique he is.

Schoenfield: I’m going off the board here since there are too many to choose from. But how about Mets reliever Edwin Diaz, who has struck out more than 50% of the batters he has faced (something only Aroldis Chapman and Craig Kimbrel have done over a full season) against Luis Arraez, this generation’s Tony Gwynn. As a reference: Gwynn faced Nolan Ryan 67 times and struck out nine times.

Passan: Ohtani vs. anyone. It could be Ohtani at the plate, as the starting designated hitter, against whoever is unlucky enough to face him. It could be Ohtani on the mound, as a pitcher, blowing 101 mph heat or unfair splitters or sweeping sliders or joint-locking curves. Ohtani puts the “All” in All-Star.