Indian opening batter Prithvi Shaw shared a cryptic post on his Instagram story, amid reports of failing a Yo-Yo test ahead of IPL 2022. Shaw put up an Instagram story around the same time when reports of the right-hander failing a Yo-Yo test at the NCA in Bengaluru started doing the rounds. “Please don’t judge me when you don’t know my situation. You are creating your own Karma,” his story read. News agency PTI reported that Shaw, who is set to turn up for the Delhi Capitals in the 15th edition of the Indian Premier League, achieved a Yo-Yo score of less than 15. The current qualification mark in Indian cricket for a Yo-Yo test is 16.5. 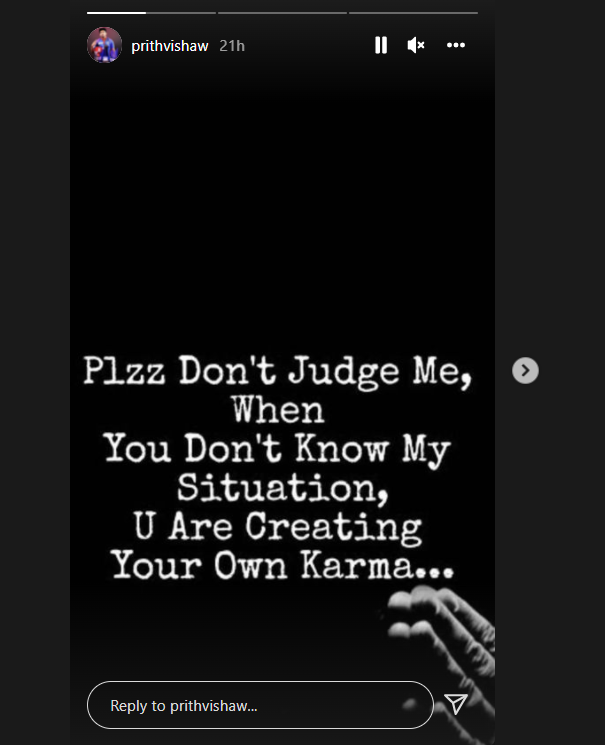 “These are just fitness updates. Obviously, it doesn’t stop Prithvi from playing for Delhi Capitals in IPL. It’s just a fitness parameter and not the be all and end all,” a source told PTI.

“Look, he has played three Ranji matches back-to-back. Once you play three first-class games on the bounce, the fatigue can also affect your Yo-Yo score,” he added.

Shaw, of late, hasn’t been among the fittest of Indian players and perhaps that is one of the reasons that of late, he has not been considered in any of the current senior teams across formats.

Even as a replacement, the team management, in the white-ball format, has preferred Mayank Agarwal as a reserve opener despite some underwhelming performances by the Karnataka man.

“If Prithvi is not being repeatedly considered, then perhaps his fitness standards aren’t up to the mark, as in what is expected of a Team India player,” the source said.

Shaw last played for India in a T20I against Sri Lanka in Colombo in July 2021. The talented right-hander, however, was retained along with Rishabh Pant, Axar Patel, and Anrich Nortje by IPL franchise Delhi Capitals ahead of the mega auction.

Shaw will be seen in action when DC begin their IPL 2022 campaign against Mumbai Indians on March 27.