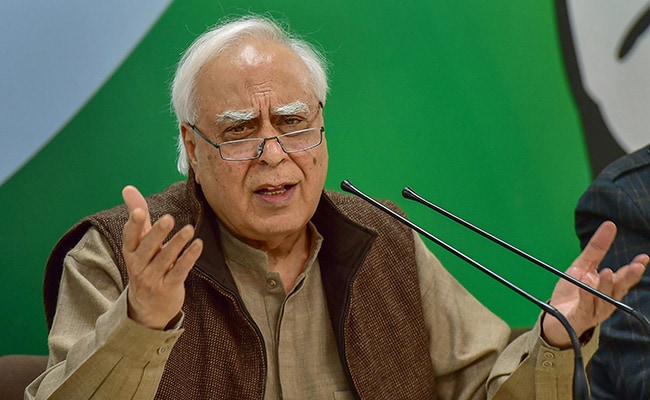 The infighting in the Congress continued after the Congress Working Committee meet, with the party’s Lok Sabha whip Manickam Tagore today hitting out at senior leader Kapil Sibal for his remarks against the leadership and accusing him of speaking the language of the RSS and BJP.

Mr Tagore, a staunch Rahul Gandhi loyalist, said the RSS and the BJP want the Gandhis to be out of leadership position in the party in order to kill the Congress party and destroy the ‘idea of India’.

“Why the RSS and BJP wants Nehru-Gandhi’s out of the leadership? Because without Gandhi’s leadership Congress will be become Janata party. It’s easy to kill Congress then it’s easy to destroy the idea of India (sic),” Mr Tagore said on Twitter.

“Kapil Sibal knows it but why he is speaking the language of RSS/BJP,” he claimed.

Kapil Sibal has said that Gandhis should step aside and give some other leader a chance to lead the party. “Leadership is in cuckoo land… I want a ‘Sab ki Congress’. Some want a ‘Ghar ki Congress’,” Mr Sibal told the Indian Express in an interview.

The remarks came after the Congress Working Committee met on Sunday, and after almost five hours of deliberations urged Sonia Gandhi to continue to lead and initiate changes required to strengthen the party.

The Congress Working Committee also rejected Mrs Gandhi’s offer to make any and every sacrifice for the party, which was construed by some as an offer of Gandhi family to step aside, and reposed faith in her leadership.

The Congress then put out a video of all its former leaders from Mahatma Gandhi, Jawaharlal Nehru and Indira Gandhi, on its Twitter handle.

“We will fight on. We will overcome. We will continue to raise your voice,” the party said.