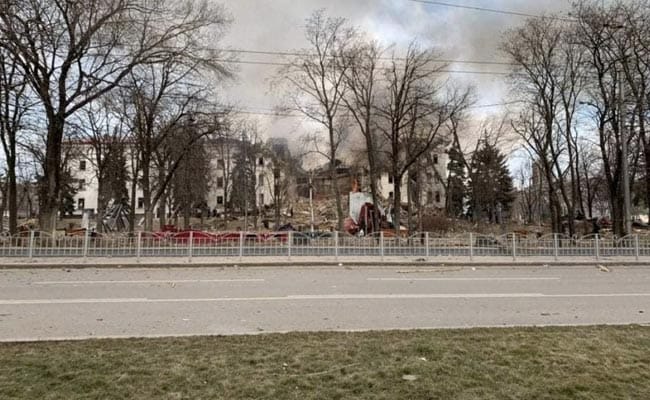 Among the 30,000 civilians said to have fled Mariupol so far.

Bloody new attacks on civilians fuelled accusations Thursday that Russia is committing war crimes in Ukraine, as the United States warned it will make China pay for any support given to Moscow’s assault.

Three weeks into Russia’s devastating invasion, the harsh tally of assaults on civilian targets grew to include a school and a cultural centre in the town of Merefa, pounded by overnight artillery fire with 21 people killed, authorities said.

Despite the mounting carnage, punishing international sanctions and unexpectedly strong resistance from Ukrainians, top US diplomat Antony Blinken said Thursday he saw no sign that Russian leader Vladimir Putin “is prepared to stop.”

“Intentionally targeting civilians is a war crime. After all the destruction of the past few weeks, I find it difficult to conclude that the Russians are doing otherwise,” he said, following warnings from the G7 that those behind such crimes “will be held responsible.”

Blinken was doubling down on the tough language used by President Joe Biden — who a day earlier branded Putin a “war criminal” and on Thursday called him both a “thug” and a “murderous dictator.”

He spoke as authorities were still trying to count the dead at the theatre targeted by a bomb in southern Mariupol a day earlier — which Ukraine’s leader Volodymr Zelensky held up as evidence “Russia has become a terrorist state”.

In the latest of a series of resonant speeches to Western lawmakers, Zelensky told the German parliament that Moscow was building a new Cold War wall across Europe, “between freedom and bondage.”

Local officials say more than 2,000 people have died so far in indiscriminate Chechnya-style shelling of the strategic port, and 80 percent of its housing has been destroyed.

Under new Russian shelling, rescuers were combing through the smoking rubble of the Drama Theatre, where Ukrainian officials said more than 1,000 civilians were sheltering in a basement bomb shelter when it was bombed. Human Rights Watch believes they numbered at least 500.

Among the 30,000 civilians said to have fled Mariupol so far, evacuees said they were forced to melt snow for drinking water and cook food scraps on open fires, with water and power supplies cut off.

“In the streets there are the bodies of many dead civilians,” Tamara Kavunenko, 58, told AFP after reaching the central city of Zaporizhzhia.

– US puts China on notice –

Biden and NATO have refused to get directly involved in the conflict, fearing an escalation with nuclear-armed Russia that would trigger World War III.

Instead Biden has successfully marshalled a tight Western alliance against Moscow, piling sanctions on Putin’s regime while giving military support to Ukrainian forces.

Beijing has refused to condemn Moscow, and Washington fears the Chinese could switch to full financial and even military support for Russia, transforming an already explosive transatlantic standoff into a global dispute.

A phone call between Biden and his Chinese counterpart Xi Jinping is planned for Friday, and Blinken said his boss would press Beijing to help end the war, rather than support its fellow authoritarian ally.

Biden “will make clear that China will bear responsibility for any actions it takes to support Russia’s aggression and we will not hesitate to impose costs,” Blinken said.

The broader economic consequences from the war could cut global growth by “over one percentage point” in the next 12 months, the Organisation for Economic Cooperation and Development said.

But Russia’s finance ministry said Thursday it had made interest payments worth $117.2 million on two foreign bonds, avoiding a default for now.

With stop-start peace talks ongoing, officials in Kyiv said Russia had agreed to nine humanitarian corridors Thursday for fleeing refugees, including one out of Mariupol.

But Blinken said that Moscow was not sincere, stating: “I have not seen any meaningful efforts by Russia to bring this war that it is perpetrating to a conclusion through diplomacy.”

He has been making a series of impassioned speeches to lawmakers in Western nations, each one tailor-made by invoking the most stirring moments of their recent histories.

This time, before the German parliament, he drew on a 1987 speech in Berlin by US president Ronald Reagan: “Dear Mr Scholz, tear down this wall,” he implored German Chancellor Olaf Scholz.

“It’s not a Berlin Wall — it is a wall in central Europe between freedom and bondage and this wall is growing bigger with every bomb.”

In an overnight video message, Zelensky urged Russians directly to lay down their arms.

“If your war, the war against the Ukrainian people, continues, Russia’s mothers will lose more children than in the Afghan and Chechen wars combined,” he said.

The Ukrainian leader was speaking virtually from Kyiv, which Russian troops are still trying to surround in a slow-moving offensive.

Fresh fighting broke out on the city’s edge as Ukrainian and Russian forces traded shell and rocket fire in the northwest, AFP journalists witnessed.

Civilians ran for cover as shelling set fire to a building near a warehouse, across the road from a mall with a multiplex cinema.

Inside the warehouse’s car park, a Ukrainian soldier carrying a rifle ran in a crouch as gunshots crackled.

A man carried a prone child in his arms into a nearby block of flats, and at least five ambulances raced towards the scene.

In Odessa, on the Black Sea, civilians were bracing for attack, with tanks deployed at intersections and monuments covered in sandbags.

And elsewhere, civilians in bomb shelters did what they could to help forget the war raging outside — even just for a while.

From her shelter in Ukraine’s second city Kharkiv, Vera Lytovchenko has become a social media sensation with her violin performances and used the attention to launch a fundraiser.

“I want to help my friends and music teachers who have lost their homes, their jobs, their instruments,” said the soloist.

“I don’t want to feel helpless,” she said.