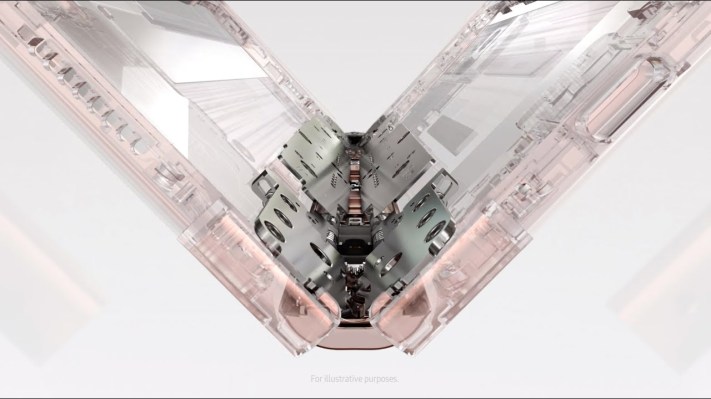 More and more of Samsung’s smartphones don’t jiggle, jiggle. They fold. At least, that’s the thesis shared by Dr. TM Roh, who serves as president and head of the company’s Mobile Experience Business. In a heartfelt blog post about smartphones and the folding thereof, the executive argues that the technology’s somewhat lackluster past is behind it, and that folding is the future. He also shares some interesting stats about customer preferences in this space. Spoiler alert: 70% of buyers have a strong preference for flip-phone-style foldables.

Foldable smartphone tech finds the middle ground between the huge screens customers want, and the fits-their-pocket constraint they demand, Samsung claims. This glorious spinning GIF is the Galaxy Flip 5G, which was launched a couple of years ago. Image Credits: Samsung (opens in a new window)

Foldable screens makes a lot of sense for a number of reasons; the large glass surfaces that we desire need to go somewhere, and as someone who’s been carrying XL-sized smartphones around for a while, I can attest to one thing: There’s only so big phones can get before they no longer fit in pockets. The next frontier could very well be folding, and Samsung is eager to show that the company wants to lead the charge.

“Last year, we saw almost 10 million foldable smartphones shipped worldwide. That’s an industry increase of more than 300% from 2020, and I predict this fast-paced growth will continue,” writes Roh, sharing some interesting numbers on the overall rollout and user adoption patterns.

Last year, 70% of users that chose Samsung Galaxy foldable options chose the Flip — the phone that folds in half along its shortest axis, much like the Razr flip phones of days gone by. Around 30% chose the Fold, where the mechanism helps you origami the phone in half length-wise, making a candy bar-shaped phone. Samsung describes its Fold as the “ultimate productivity device, which [empowers users] to do more through hyper-connected, individual computing.”

Some innovations take a while to take hold in the smartphone market, but Samsung’s team is bullish on phones that smallify with the flick of a wrist, and seem a little surprised by how quickly the market embraced the new tech.

“Three years ago, Galaxy foldables could be summed up in a single word: radical. Very quickly, however, it became clear that this groundbreaking, flexible design fit perfectly into modern lifestyles,” argues Roh. “As a result, what was once a novelty three years ago, is now the preferred choice for millions.”

The company is planning to unveil its next generation of foldables next month.