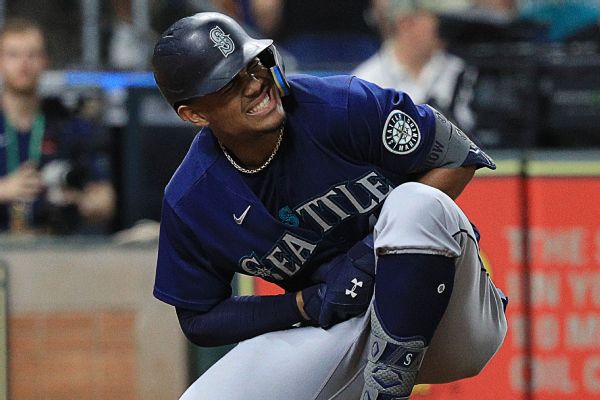 HOUSTON — Seattle Mariners rookie outfielder Julio Rodriguez was hit on the hand by a pitch in the eighth inning and was later lifted for a pinch-hitter in the ninth Saturday night in a 5-4 win over the AL-West leading Houston Astros.

“He did not feel comfortable with a bat in his hand,” Servais said. “So, we’ll pray that it is not broke.”

Rodriguez was hit on the back of the hand as he swung at a pitch in the top of the eighth. He struck out but played in the field in the bottom half of the inning before being lifted in the ninth.

Abraham Toro, who pinch-hit for Rodriguez, delivered a go-ahead two-run single with two outs off Astros closer Ryan Pressly to help lift the Mariners to victory.

Pressly (3-3) entered the ninth having converted 21 of his 24 save opportunities this season. He gave up two runs on two hits, walked one and struck out two in the loss in his first blown save since June 23, which came against the New York Yankees.

Toro, who played parts of three seasons with Houston, said his familiarity with Pressly gave him an edge Saturday night.

“He’s somebody that is generally aggressive, so I know he likes to attack the zone,” he said of Pressly. “I was already swinging from the get-go.”

Astros manager Dusty Baker added of Toro: “He has been a thorn in our side since we traded him over there. It was a big hit that he got tonight.”

Seattle beat Houston for the first time since June 8, snapping a five-game losing streak to the Astros.