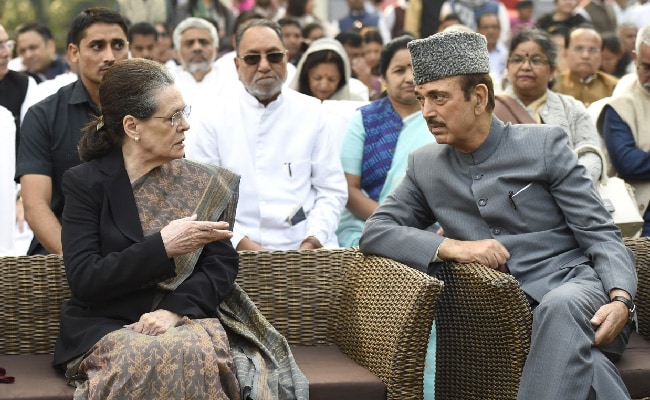 Congress president Sonia Gandhi is expected to meet Ghulam Nabi Azad today, according to sources. The meeting comes a day after the core group of Congress’s G-23 dissidents, led by Mr Azad, met to discuss the way ahead for Congress.

The dissidents have been having a series of meetings since Wednesday, upset with the stance of the loyalists at the Congress Working Committee, party’s highest decision-making body. The loyalists insist on reaffirming the leadership of the Gandhis despite serial losses.

At the last CWC meet, party leaders had turned down Sonia Gandhi’s offer to step down from all posts with her children Rahul Gandhi and Priyanka Gandhi Vadra.

The G-23 has been persistently seeking a restructuring of the organisation since it first wrote to Sonia Gandhi in 2020 after a string of electoral losses.

The group had, in a statement on Wednesday, said the “only way forward for the Congress was to adopt a model of inclusive and collective leadership and decision making at all levels.” They insisted they want to strengthen the Congress and “not undermine it in any way.”

Yesterday, Rahul Gandhi had reached out to former Haryana Chief Minister Bhupinder Singh Hooda, who had attended the G-23 meet on Wednesday. During the meeting, Mr Hooda sought clarity over who is making the decisions in the party, sources said. Stressing on the need to make decisions collectively, Mr Hooda told Rahul Gandhi that the leaders would often come to know about party decisions from the newspapers.

Mr Hooda also said that the G-23 leaders have not done any “anti-party activities” adding that the meeting of faction was held after informing Sonia Gandhi.