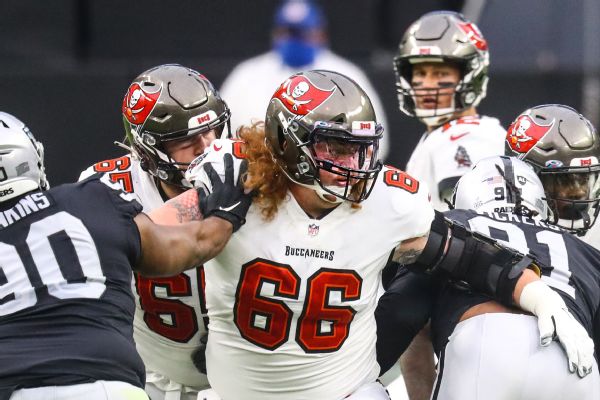 Bucs head coach Todd Bowles said Jensen will undergo an MRI today to determine the severity of the injury. General manager Jason Licht said the team may not have a diagnosis for a few days due to swelling.

The injury happened during a team period and resulted in the whole team gathering around Jensen, who has been a fixture on the Bucs’ offensive line for five seasons. The mood immediately turned somber.

Jensen, 32, agreed to a three-year deal with the Buccaneers in March. He surrendered only two sacks in both the 2021 regular season and postseason combined and produced a 93.1% pass block win rate from the center position — regular season and playoffs combined — the past two years protecting Tom Brady.

Jensen signed as a free agent with the Buccaneers in 2018, moving from guard to center as the team wanted to bring more attitude and toughness to its offensive line. Jensen immediately emerged as a tone-setter. His 4,518 snaps at the center position are the most of any offensive lineman since 2018.

Initially, Jensen had issues channeling his aggression, and at times it led to costly penalties, but he has improved tremendously in that department. In his first season in Tampa, his 11 penalties were tied for fourth most in the league among offensive linemen. That number dropped to seven over the past two seasons.

Originally drafted by the Baltimore Ravens in the sixth round of the 2013 draft, he has appeared in 100 games with 90 starts in eight seasons.