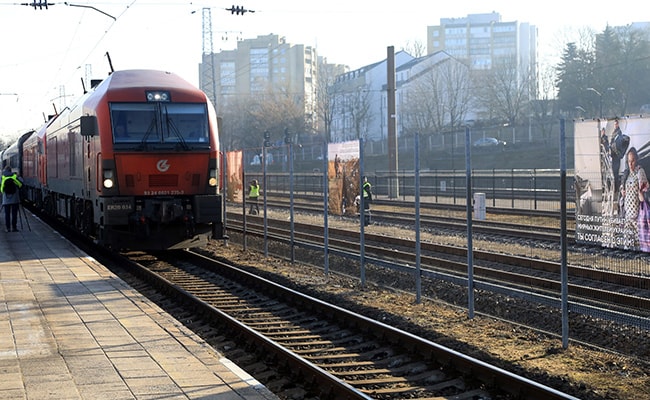 At the train station in Lithuania’s Vilnius, EU passengers allowed to get off the train except Russians

An exhibition of shocking images from the war in Ukraine opened on Friday at a train station in Lithuania with the aim of giving Russian transit travellers a true picture of the conflict.

The Baltic state allows 100 trains a month carrying Russian passengers to transit to and from the exclave of Kaliningrad under a special arrangement between Lithuania, the European Union and Russia.

The transit arrangement has continued despite numerous sanctions on air travel against Russia since President Vladimir Putin gave the order for Russian forces to invade Ukraine on February 24.

At the train station in the Lithuanian capital Vilnius, EU passengers are allowed to get off the train but the Russian passengers must stay on it.

The new exhibition of 24 photos has been set up on the platform used by the transit trains, with the images placed at the height of the carriage windows.

“Today, Putin is killing the peaceful population of Ukraine. Do you approve of this?,” read the inscription on some of the pictures exhibited.

“We have selected images that emotionally convey the grim reality faced by the people of Ukraine,” said Jonas Staselis, head of the Lithuanian Press Photographers Club who helped organise the exhibit.

“We want to spread the message widely that there is no escape from reality in a free country,” he said.

There have been a number of initiatives in Lithuania, which was once ruled by Moscow as part of the Soviet Union, to attempt to better inform ordinary Russians about the ongoing conflict.

A group of Lithuanians earlier this month launched a campaign for Russian diaspora volunteers to call home phone numbers within Russia chosen to random and speak to people about the invasion.

The effect of such initiatives remains to be seen.

As one of the transit trains passed through the station on Friday, a passenger was seen making an obscene hand gesture at the photographs.