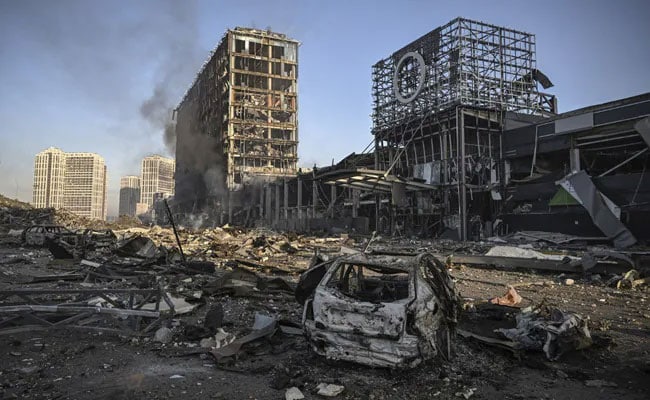 The two sides are due to meet for a second round of face-to-face talks next week in Turkey.

President Volodymyr Zelensky said Sunday his government is “carefully” considering a Russian demand of Ukrainian neutrality, a key point of contention as negotiators for both sides prepare for a fresh round of talks aimed at ending the brutal month-long war.

“This point of the negotiations is understandable to me and it is being discussed, it is being carefully studied,” Zelensky said during an interview with several independent Russian news organisations.

The UN estimates that at least 1,100 civilians have died and more than 10 million have been displaced in a devastating war that has gone on far longer than Moscow leaders expected.

The new talks — starting in Turkey on either Monday or Tuesday, according to conflicting reports — come after the Russian army said it would begin focusing on eastern Ukraine in a move some analysts saw as a scaling back of Moscow’s ambitions.

But US President Joe Biden questioned that interpretation — and may have roiled the coming talks by saying in Warsaw that Russian President Vladimir Putin “cannot remain in power”.

The ad-libbed remark — which the White House swiftly tried to roll back — sparked outrage in Moscow and sowed widespread concern in Washington and abroad, seeming to undercut Biden’s own efforts on a European visit to underscore a carefully crafted unity in support of Kyiv.

France’s President Emmanuel Macron warned that any escalation “in words or action” could harm his efforts in talks with Putin to agree on evacuating civilians from the devastated port city of Mariupol.

Neither intense diplomacy nor steadily mounting  sanctions have persuaded Putin to halt the war.

But as the Russians face serious tactical and logistical problems, Ukraine’s intelligence chief Kyrylo Budanov said Putin might be seeking to divide the country in Korea-like fashion — to “impose a separation line between the occupied and unoccupied regions”.

“After a failure to capture Kyiv and remove Ukraine’s government, Putin is changing his main operational directions. These are south and east,” he wrote on Facebook. “It will be an attempt to set up South and North Koreas in Ukraine.”

Russia may try to establish a quasi-state of occupied zones with its own currency, he said, while adding that Ukrainian forces could foil those plans.

A key demand from Putin, even before his troops rolled into Ukraine on February 24, was that it renounce its stated intention of eventually joining NATO.

The Kremlin earlier this month said Sweden and Austria offered models of neutrality that Ukraine could adopt.

Kyiv rejected the proposal, and in his interview with Russian journalists, Zelensky accused Putin of dragging out negotiations and prolonging the conflict.

NATO’s 1949 treaty gives any European nation the right to apply for membership, and US deputy secretary of state Wendy Sherman said in January that “we will not slam the door shut on NATO’s open-door policy.”

But NATO members have said Ukraine membership is a distant option at best. Were Kyiv to join the 30-member Western alliance, NATO would be committed to help defend it against any future attack.

The new round of talks come as Russia has de facto control over the self-proclaimed Donetsk and Lugansk republics in the country’s eastern Donbas region.

The head of Ukraine’s Lugansk separatist region said it may hold a referendum on becoming part of Russia — a move immediately slammed by Kyiv.

As Russian forces continued a devastating siege of Mariupol — a key obstacle to Moscow’s ambition of gaining unbroken control from the Donbas to the Crimea peninsula — its residents have recounted harrowing scenes of destruction and death.

Ukraine was making a new push to get civilians out on Sunday, with an aid route agreement for people to leave by car or bus, said Deputy Prime Minister Iryna Vereshchuk.

Several earlier attempts at establishing safe exit routes for the 170,000 civilians trapped in the city have collapsed amid mutual finger-pointing.

Macron said Sunday he would speak to Putin in the next two days to organise “a ceasefire and then the total withdrawal of (Russian) troops by diplomatic means” to allow full evacuation.

“If we want to do that, we can’t escalate either in words or actions,” he told broadcaster France 3, moving to dial down Biden’s blunt words against Putin.

Russia’s original hopes of sweeping across Ukraine undeterred have faded, and with little progress in capturing key cities, its army has launched increasingly deadly attacks on civilians.

With Western-supplied weapons, Ukraine’s fighters continue to hold off — or even push back — Russia’s far-bigger military.

In the southern town of Mykolaiv, which had come under heavy Russian assault for weeks, the bombardments appeared to be easing.

“Now I can move my arms and legs a little. I still can’t get up without my mother’s help, but hopefully I can leave soon,” she told AFP.

The frontlines appeared to have receded from Mykolaiv, with a counteroffensive being mounted in Kherson, about 80 kilometres (50 miles) to the southeast.

Shelling killed two people in a village near Kherson, the only significant city the Russian army has claimed to have seized.

In Kherson itself, around 500 people joined in anti-Russian demonstrations on Sunday.

Kyrylo, a paramedic who spoke with AFP by telephone, said Russians dispersed the peaceful rally with tear gas and stun grenades.

The Ukrainian defence ministry said its forces had also recaptured Trostianets, a town near the Russian border.

It released images showing Ukrainian soldiers and civilians among heavily damaged buildings and what appeared to be abandoned Russian military equipment.

On the eastern outskirts of Kharkiv, a Holocaust memorial at Drobytskyi Yar commemorating 15,000 Jews murdered by the Nazis in World War II was damaged by Russian shelling.

Bombardments continued in Irpin, as well as other areas around Kyiv, said Ukrainian authorities.

Tamara Osypchuk, 72, told AFP she wrote poetry to calm herself in her Irpin apartment when the bombs rained down.

“The explosions were very strong — like a volcano is exploding,” she said, resting in a chair at an evacuation centre.

Ukrainian leaders meantime pushed the fight on the economic front, with Foreign Minister Dmytro Kuleba calling for a boycott of French retailer Auchan, which has continued doing business in Russia.

“If Auchan ignores 139 Ukrainian children murdered during this month of Russian invasion, let us ignore Auchan and all their products,” he wrote on Twitter.

Household names from McDonald’s to Coca-Cola have left Russia in droves as unprecedented Western sanctions were imposed on Putin’s country in a bid to stop the war.